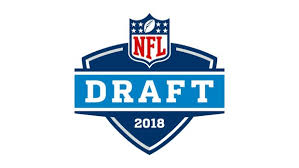 The 2019 NFL draft will commence tomorrow on April 26th, presenting the 32 NFL teams to add young talent to improve their team. Here are my predictions on the outcomes of the first ten picks:

1. Cleveland Browns: QB Sam Darnold
To be completely honest here, the first overall pick is a toss up between QB Sam Darnold or Josh Allen. However, due to their seemingly superior interest, the Browns will take Sam Darnold. Sam Darnold is a big guy who is very reminiscent of Ben Roethlisburger and has massive potential to be a star Quarterback. While he may not the most NFL ready Quarterback, the Browns are in no rush to start him after their signing of former Buffalo Bills QB Tyrod Taylor. Therefore, I believe the Cleveland Browns will draft Darnold to be their franchise Quarterback, something this franchise has always lacked.

2. New York Giants- Bradley Chubb
Drafting Bradley Chubb would be perfect after the New York Giants lost pro-bowl Defensive End Jason Pierre-Paul. In addition to this, it would look bad for the Giants to draft a QB after the whole bench Eli Manning fiasco last year. Bradley Chubb is an electric playmaker who is extremely physical and dominates opposing tackles. His ability to change games and draw double teams from offensive linemen will help strengthen a very weak Giants defense heading into 2018-2019 football season.

3. New York Jets- QB Josh Rosen
The New York Jets have been eyeing QB Josh Rosen for a while now and are seemingly set on him. According to several scouts at his NFL pro day, Rosen appears to be the most NFL ready QB and the Jets are reportedly set on him. The West Coast offensive Rosen ran at UCLA is very similar to the offenses that NFL teams utilize today and the Jets hope he can come in to start and contribute right away.

5. Buffalo Bills (trade up from the Broncos)- QBJosh Allen
The Buffalo Bills need a Quarterback. Badly. This is while they will trade up to draft QB Josh Allen. The Bills just lost their starting QB in Tyrod Taylor and need a replacement badly. Josh Allen has the strongest arm out of all the QB’s but lacks the poise in the pocket that Darnold and Rosen have according to multiple scouts. The Bills need Allen to come in and produce immediately, as their offense is expected to downgrade significantly this season.

6. Indianapolis Colts- OG Quentin Nelson
The Colts o-line needs some major work and Quentin Nelson will help it immensely. Nelson is a tough-minded offensive guard who is very physical and runs over his opponents when he pulls. His gameplay and mindset is very similar to pro-bowl OG Richie Incognito and Nelson is just the player the Colts need after a horrible year for the offensive line, which generated no run game and ranked most in the league in sacks allowed.

7. Tampa Bay Buccaneers- S Minkah Fitzpatrick
Once again, this pick is a toss up between S Minkah Fitzpatrick and S Derwin James. The Buccaneers were dead last in total defense last year and the presence of a talented safety will change this drastically. Both Fitzpatrick and James can play coverage exceptionally and are tough players who can fill in the box for run defense. Whichever safety they will draft, they will have a big impact immediately

8. Chicago Bears- CB Denzel Ward
The Chicago Bears were 28th in passing defense last year and this was due to subpar play by their secondary. Denzel Ward ran a quick 4.32 in his 40 yard dash and will add great speed to the Bears secondary. Ward has been pronounced as the top Cornerback in the draft and will be placed into the Bears starting line up as soon as possible

9. San Francisco 49ers- LB Tremaine Edwards
The former all-pro LB core of Navarro Bowman, Patrick Willis, and Justin Smith is all but gone for the 49ers. They need young, new talent at the Linebacker position. At this point in the draft, Virginia Tech LB is a steal, falling this far only because so many teams have other needs. 6″5 Tremaine Edmunds is an absolute wrecking ball on the football field and has much upside at only 19 years old. Tremaine Edmunds looks to join Willis and Bowman as all-time Linebacker greats for the 49ers

10. Oakland Raiders- LB Roquan Smith
The Oakland Raiders are going to draft a linebacker. Plagued by injuries and inconsistent play, the LB core for the Raiders was the most inconsistent part of their defense last year. With a solid defensive line, the Raiders were 24th in the league in rush defense, leaving most of the responsibility for linebackers. Roquan Smith is a scary outside linebacker who can stuff the run and sack the QB in seconds. He will be quite the pest for the rest of the league