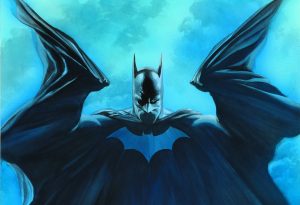 Although Batman is traditionally a comic book character, the spread of the Dark Knight through all mediums truly is a testament to how well the character has been received since 1939. Since his debut, Batman has come to be instantly recognizable thanks to his appearance in not only comic books, but also movies, television, video games, and novels. Because of the wide range of interpretations of the character, Batman has reached the point where he has become popular not only in American culture, but throughout the entire world. Like iconic figures such as Hercules and Robin Hood, Batman and the characters and settings that accompany him have become legend.

Thanks to the intrigue that the character of Batman sparks in so many creative talents, the fictional world of the Dark Knight has only become more expansive in recent years. One of the most important aspects to the legend of the Dark Knight is the city that created him. After years of writers adding new elements to the mythos, Gotham City has developed to the point where many fictitious locations and landmarks have become iconic in their own way. This includes locations such as the nightmarish Arkham Asylum, the hopeful beacon of Wayne Tower, and Park Row—infamously known as Crime Alley—where Bruce Wayne’s parents were murdered before his eyes. These are also locations that have been developed through all mediums: comic books, movies, games, and television alike. As a result of such exposure, Gotham City itself has in a sense become a character of its own.

Along with Gotham City, 80 years of evolution and thousands of stories have allowed Batman to become one of the most complex fictional characters of all time. A wide variety of stories have allowed for various changes to the character over the years, including changes in his motivations, personality, and what the character represents. One of the best examples of Batman’s evolution can be seen in the Emmy award winning Batman: The Animated Series, where different aspects of the character were combined to form what many still consider to be the quintessential version of the Caped Crusader. Episodes such as “Nothing to Fear” and “The Forgotten” have balanced many aspects of the character, making him a well-developed and rounded personality. The series emphasizes the dark and terror-inducing aspects of the mantle Bruce Wayne has assumed, but also highlights the sympathetic nature and humanity that fuel Batman to make Gotham City a safer place. In other words, this version of Batman manages to become a symbol that can simultaneously strike fear into the hearts of criminals, while also inspiring those citizens of Gotham who have the best intentions, such as the noble Commissioner Gordon.

The constant reinvention of Batman will allow him to always remain relevant in our ever changing society. Batman will continue to be a message for fans, whether accomplished through innovative modernizations such as in Batman: The Animated Series, or by creating completely alternate and independent versions of the character where writers have free reign to take their own approaches. One example of this is the Dark Knight from the “Gotham By Gaslight” comic books and movie, where Batman’s life and mission are set in the Victorian era, and Batman is forced to deal with the arrival of Jack The Ripper in Gotham City. The character of Batman doesn’t seem to have boundaries on how his stories can be told and from what medium they are told, and it is because of this that the Caped Crusader has stood the test of time for nearly a century.