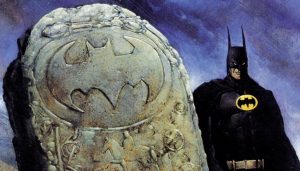 Aging can be a somewhat complicated issue in comic books, due to the fact that most characters remain the same over extended periods of time, or age at an extremely slow rate. However, Batman has often been one of the more interesting characters when it comes to becoming older, as there have been multiple interpretations on what happens when the Dark Knight starts to move beyond his peak of physical strength. This also leads into the idea that Batman fights an endless war on crime, which causes the character to sometimes doubt how much of a difference he actually makes, as seen in the Batman: The Animated Series episode “I Am The Night.” The shear amount of stories that depict Batman past his prime tell how interesting a time in his life it is. Aging causes Batman to struggle with difficult questions on his effectiveness, and force him into compensating for his diminishing strength, often leading him to grow as a character and sometimes even allow him to become stronger than ever.

Before looking at the different futures that The Dark Knight has ventured into, it’s important to look at the Batman’s goals and beliefs in his present. These beliefs are what compel Batman and push him into these alternating futures wherein many of which he still dawns the cape and cowl. It’s been depicted in multiple Batman stories over time, whether in comics, television, or any other medium, that Batman understand that the battles he fights are never ending. In Paul Dini and Alex Ross’ Batman: War on Crime, The Dark Knight thinks to himself, “I know I am fighting a war I can never completely win.” In my opinion, Dini is one of the writers who has come to best understand the character and what he stands for. In Batman: War on Crime, Batman focuses most specifically on helping a boy named Marcus, who lost his parents in a fashion similar to the young Bruce Wayne. In a larger scope, Batman focuses his attention on the Bayside neighborhood of Gotham, where Marcus lives. He memorizes every street and alley before beginning his crusade in the area on two fronts: fighting crime that has consumed the neighborhood, while also providing hope and promise through Bruce Wayne’s philanthropy. Batman: War on Crime depicts a strategic approach to fighting against an enemy as large as crime itself. The Dark Knight occupies smaller neighborhoods one at a time, and tries to redeem those who still have hope in them, but are being consumed by darkness. I feel this “piece-by-piece” approach to Batman fighting crime is expanded upon in Kingdom Come, a DC Comics miniseries and the first story which I’ll be looking at that is set later in Batman’s career.

Although Kingdom Come (written by Mark Waid with art by Alex Ross) focuses primarily on the character of Superman, Batman is still prevalent enough in the story to be looked at from an analytical point of view. This version of Batman wears a full-body exoskeleton in order to keep his old and broken body together after decades of waging his war on crime. For most of the story, Bruce takes a more behind-the-scenes approach, having practically turned Gotham City into a utopia thanks to the giant, robotic “Bat-Knights” which patrol the city, and are controlled by Batman himself. Batman’s monitoring of the now peaceful Gotham is basically the same “piece-by-piece” approach mentioned earlier, since he focuses primarily on his own city while Superman and other heroes try to prevent an apocalyptic conflict that threatens the rest of the world. It isn’t until the end of the story that Bruce Wayne himself dawns a mechanized armor to answer Superman’s call in a desperate final battle to save humanity from destroying itself.

Before the events of Kingdom Come, most of the heroes, including Superman, had retired after a new generation of more ruthless heroes had become in style. While Batman didn’t approve of many of these heroes, he was one of the few who never retired, which brings about the topic of Batman’s legacy. In most Batman stories taking place in the future, continuing the legacy of The Dark Knight and questioning how that legacy can survive the end of Bruce’s career is an essential theme. This theme is prevalent in the Batman Beyond animated series, where Bruce Wayne—after a failed retirement—passes down his mantle to Terry McGuinness, and mentors the new Batman so that Gotham can always be protected. Bruce Wayne takes the idea of legacy to an extreme in the novel Wayne of Gotham, where his need to continue to be Batman becomes more of an obsession. In this story, a middle-aged Batman creates a new innovative suit and batmobile in an attempt to remain as efficient as his younger self. However, his drive to keep the legacy of the Batman alive isn’t without consequences, as his relationships with his closest allies, including police Commissioner James Gordon and even the loyal butler Alfred Pennyworth, become increasingly strained. His constant work as Batman leads to a nonexistent social life as Bruce Wayne, where rumors and gossip begin to spread on why Wayne has become so isolated and reclusive in recent years.

Ultimately, Batman’s future can be depicted in an infinite number of interpretations, as Bruce’s war against criminals is never truly completed. Whether through the gritty interpretation in Frank Miller’s The Dark Knight Returns, or in a more hopeful light like in Batman Beyond, Bruce Wayne continues to fight crime in one way or another until his demise, whether through strength and resilience, or by stubbornness and obsession. Even after Wayne’s death, his legacy always lives on through his allies and through those who have been inspired by him. As Grant Morrison wrote during his acclaimed run on the character, “Batman and Robin will never die!”