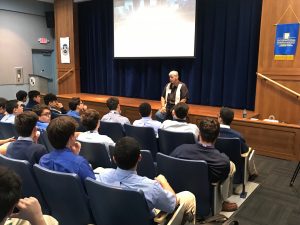 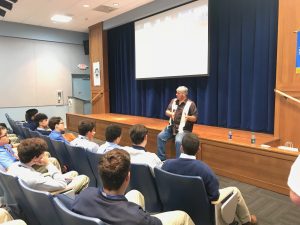 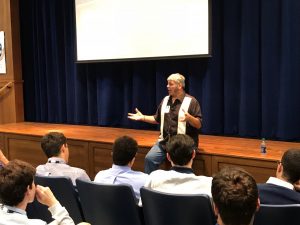 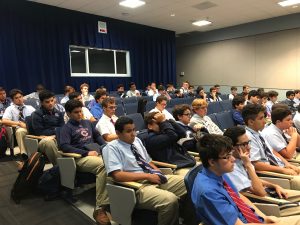 An article by Josep Amiguet
Pictures taken by Eric Contreras
Paul Ferretti recalls when he was in high school and was in an auditorium listening to the personal  accounts of Pearl Harbor survivors.  Never did he think that he would be giving his own recollections of being a witness to a national tragedy that would “live on in infamy.” Ferretti was not only a witness, but a hero during the events that transpired September 11, 2001.  In partnership with the Rho Kappa History Honor Society of Columbus, Paul came in after dismissal and told his story about his past experience and answered questions.
On a Tuesday 17 years ago, Paul was in a conference room in the North Tower of the World Trade Center working as a computer engineer for Unysis, an information technology company. “It sounded like someone took a giant bag of cement and slammed it on the floor above us,” is how he described the impact of the first plane on the North Tower.
“Do you know how in movies when a train conductor pulls the brakes—then the whole train car moves forward?” Paul said as he imitated being jerked forward by such force. He recalled that everything in the room shifted and the entire building had shook back and forth for a second. In a room with a bunch of “old timers”, as he referred to them, Paul was directed by one of his coworkers to leave everything and head for the stairwell.  Paul used the term “old timers” to indicate people who had worked at the World Trade Center when the garage bombing of 1993 occurred.  Evidently, the “old timers” knew from experience that being on the 71st floor at that time like that was not a good idea.  Luckily, the first plane had struck the opposite side of the North Tower where Paul’s office was.
“I was the first one in the stairwell. I didn’t see anyone for a couple floors. Within minutes of getting out, I went to the center square, where the big ball is—office furniture, papers, debris, and yes people were raining down.”
At that point Paul said his whole mentality changed.  He said that he needed to help out any way he could, so he headed towards Liberty Plaza because a triage was already set up there. Having been a master diver, Paul did have some experience with trauma and first aid. Most people who came into the triage at first had broken bones, or bruises. It was after the collapse of the South Tower that Paul recalled helping people suffering with eye problems and irritation from the debris and soot.
Paul then went on to describe his experience as a volunteer in the bucket brigade for the 5 days succeeding the attacks, looking for survivors and clearing debris. Sadly, he said the last living survivors pulled from the debris were found Tuesday. Until Thursday, knocks and scratches were heard in the rubble, but they were not found in time according to Paul. “I was getting 1-2 hours of sleep a night and working 20 hour shifts.”
Throughout the entire hour Paul was in the auditorium, he was animated and radiated a high-spirited wave of energy. Even after describing all the details of this horrific tragedy that occurred on that Tuesday over 17 years ago, Paul was still radiating. After answering questions that pertained to his memories of the day, he made sure to touch upon the personal reflection he had after the attacks.
“Why do people want to hurt us so bad?”
“Why is it that a belief system wants to attack another belief system?”
“Only the people get hurt in these conflicts, not the belief system?”
Something Paul responded with after a student asked a question really stuck out, and really summarized his whole opinion of the whole ordeal. After being asked by a student how it effected him, Paul explained his answer from a philosophical perspective:
“It made me a lot nicer and a lot more tolerant. I just wish that in a perfect world, leaders could’ve just sat down and discussed the issues they had with each other instead of wanting to attack and hurt a secretary that staples and pushes papers in the North Tower.”
After stating how it effected him philosophically and his overall understanding other perspectives, Paul was asked by a student how he commemorates 9/11. Followed by the response “That’s a good question,” Pail declared that he has a chest with various items from the site of the attack and information about the attack. In the chest, Paul said, “I have newspapers, newspaper clippings, soil from Ground Zero; and in a black plastic bag, I have the clothes I wore that day—”
If this isn’t a testament to the 9/11 survivors and their “never forget” mentality, I don’t know what is.
Even after speaking about such a somber chain of memories for almost an hour, Paul was later asked about what he does now. He happily answered that he is in a Blues Brothers cover band and travels around the state to perform.
Paul Ferretti then closed with the statement: “I figured that if I was going to have a building fall on me again, I would let it happen doing something I love.”