Robert Linfors May 16, 2021 Reviews No Comments

I remember in my sophomore year when I got detention for forgetting to wear my belt. This was the first and last time I have ever gotten a detention. It was an experience. As I walked into Deacon Dugard’s class, I saw my other peers adjusting to their surroundings. I took my seat somewhere in the class, and Mr. Rodriguez walked in. I saw everyone else standing and while I was sitting he told me to immediately stand up. He told us to stare at the wall. I stood there staring into the wall, not at it, because staring at the wall would be not seeing what the wall is. The wall was my mind. As I stared into it, I started to count numbers. One, two, three, four… one hundred and one, one hundred and two, one hundred and three… I do not remember the exact number I went to, but it was certainly around the three hundred range. Then what felt between an eternity and a millisecond, detention ended. I felt uncertain if I was born again or not. I am likely leaning to the latter since I only learned to count numbers in my spare time. 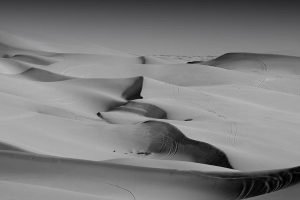 This is the atmosphere that permeates Hiroshi Teshigahara’s 1964 film Woman in the Dunes. Never has there been such a film that leaves you empty and unease from the sight of sand. Dry, white sand that collects everywhere in this film. Some scenes look like TV static from the sight of it. However, what is the most interesting about Woman in the Dunes is how it is one of the most unconventional prison films. Prison is not simply a classroom, a cell, or a waiting room. It is a place that physically and/or mentally restricts oneself. In Woman in the Dunes, it is being in a pit surrounded by sand. Niki Junpei, the main character, undergoes an interesting development by being entrapped with the titular woman in the shack. They interact with one another, but in a unique way.

Junpei and the untitled woman share an almost alien-like relationship throughout the film. He may scold her for not cooperating with his escape attempts. He may humiliate her in front of a crowd. He may express gratitude for her cooking. However, Junpei looks like he is talking to a pile of sand. The woman would usually ignore his ramblings about escape and respond with short, concise sentences about their situation. Early on, Junpei was explaining how the city will find after he is reported missing, but the woman deflects this speech by suggesting that they should dig out sand from their pit. Junpei still has his humanity left. He desperately wants to escape from the sand pit, while the woman, who has lost her husband and child in a sandstorm, is more concerned about survival. The woman almost represents the sand. She is dry and to the point, and she also has no doubts about living with it. She undermines the idea of escaping. There probably isn’t anything worthwhile outside the sandpit, she suggests.

Teshigahara examines gender roles through their relationship. Junpei early throughout the movie is seen trying to assert his righteousness on the woman. The aforementioned escape attempts and insults towards the woman. His generally aggressive behavior and escape attempts end in more sand falling into the pit as he tries to climb it. This represents one of the first stages of the development of Junpei. The woman’s more passive attitude contrasts Junpei. She is concerned about survival, but she is also concerned about transforming Junpei into her partner. She is trying to get him to accept his imprisonment. The main reason Junpei was imprisoned in the first place by the dune villagers was to get the woman a partner to dig sand. No matter how atrocious Junpei’s actions were, the woman continues on with her life. She knows the man cannot escape from the dunes, the sand will simply stop him.

With his escape attempts failing miserably, Junpei slowly comes to accept his natural prison. This is marked by him becoming a lover to the woman. However, even as he joins himself with the woman, there is an unease between their relationship. This is marked by the alien-like, dissonant soundtrack that plays when they get intimate. It reveals that while Junpei accepts his position in the sandpit, that does not mean that he will give up his hope for escape, or abuse the woman to his advantage. One scene, Junpei creates a makeshift grappling hook and escapes from the pit. He wakes up the entire village, and they soon go after him. Junpei steps into quicksand, and while slowly succumbing to it, the villagers come to rescue him and throw him back into his pit. What this also explains is that Junpei is completely unaware of his surroundings, that even if he does manage to escape from the pit, he is encircled by an entire, unknown dune, yet he still attempts to even after he has come to accept the woman and his position in the pit.

The one of the last attempts at escape for Junpei involves humiliation. A while back, he asks one of the villagers to find a way for him to get out of the pit and look at the ocean, just to feel his humanity once. The villager considers it, and later one night he is encouraged by the whole village to have intercourse with the woman in front of them in exchange for Junpei’s request. Junpei tries to convince the woman, but it fails. It is clear that Junpei has been turned into an animal in order to escape. He has been dehumanized even more than the woman has. It may seem that his desire to escape has grown more even after he accepted his fate in the sandpit. Finally, he devises his last attempt at escape that changes his character completely. He plans to capture a crow through a trap and send it out with a message, in hope for someone to find it. This last attempt is when he has devolved from his profession of an entomologist to a hunter-gatherer. However, his crude trap is shown not to catch crows, but water. Through some sort of process, water seeps into his trap. Junpei’s obsession with escape is now replaced with an obsession of improving this water-catching mechanism of his trap. He believes that it will better the village in hydration.

This is where the most significant change comes to Junpei, he has fully embraced his prison. One day, the woman is carried out of the pit because she is enduring the pains of pregnancy and the villagers forgot to bring up the ladder from the pit. Junpei actually takes the opportunity to climb up and look at the ocean for one time. Later, he returns to the pit and continues his research on the trap. Junpei’s only opportunity for escape has been met with his own choice to stay in the pit and obsess over a trap instead of freedom. His mind has been molded by the sand, the villagers, and the woman. All of whom are the same entity that foils his escape every time. He develops his own feelings for his own captors and eventually grows comfortable with them. It is the transition of an educated man to his own barbarity back to his own education. It is Stockholm syndrome with the sand that most accurately describes this development.

In the end, a message states that Junpei has gone missing for seven years. This is the most powerful statement of his psychological change. His hopes of escape were doomed from the beginning from being situated in an alien environment, and now his own choice of staying trapped has made it impossible. Woman in The Dunes truly encapsulates that fear of entrapment and finally hopelessness.