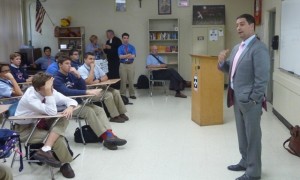 On October 21, 2015 the Columbus Pre-Law Club had a very special guest come and speak about his career as a practicing attorney. The guest was Columbus alumnus and current President of the Florida Bar Ramon Abadin. Mr. Abadin came and spoke about the areas of law that he practices, the practice of law in the 21st century, the evolution of the practice of law, and his responsibilities and duties as President of the Florida Bar for 2015-2016. 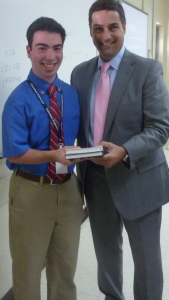 With over 30 columbus students in attendance Mr. Abadin was able to give the Columbus Pre-Law true insight on the practice of law. Mr. Abadin, Columbus Class of 1977 and graduate of Tulane University and Loyola University New Orleans School of Law, felt very happy to be back at Columbus. Dr. E. Carter Burrus, Freshman Guidance Counselor, former Director of the Mas Family Scholars Program, and Columbus Class of 1962 was present at the meeting and reminisced with Mr. Abadin about his days as a World History teacher. Mr. Abadin is a former student of Dr. Burrus and was on the football team during his time at Columbus. 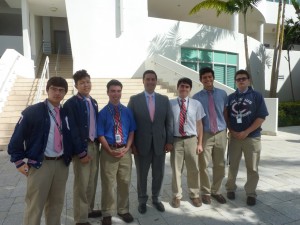 As President of the Columbus Pre-Law Club I have learned that there are many successful Columbus alumni in the field of law. Not only are these men successful but they are also men of leadership, honor, and integrity. These are all values that have been taught at Columbus through the Marist charism since 1958, over half a century. If you would like to join the Pre-Law Club it is not too late. Please contact me if you would like to be a part of this great Explorer experience.

Thank you and Adelante!