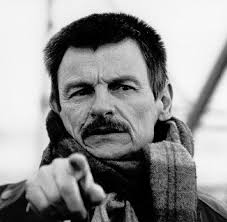 In my first instances of Russian director, Andrei Tarkovsky, he was only depicted as a side piece to a different director or a genre. Tarkovsky masterpiece Solaris wasn’t described as a masterpiece but as “the soviet response to 2001: A Space Odyssey.” Although the two films share similar elements, it is terribly unfair to reduce this film down to some sort of pseudo-political action. The government that Tarkovsky was reportedly assisting with his films were possibly his greatest opposition. The Soviet Union has constant confrontations with Tarkovsky regarding the subjects of his films and nearly all of them were censored or altered to achieve the Soviet’s desired message. Soviet film critics were heavily influenced by the government and constantly denounced Tarkovsky’s few masterpieces. Despite Tarkovsky’s impressive ability to compose films in a short time span, the Soviet Union strictly limited his production, reducing him down to 5 films over a span of 15 years. Without these political and social hindrances, Tarkovsky would have easily garnered the mainstream attention that other foreign directors like Kurosawa and Bergman had achieved. As the son of a renowned Russian poet, Tarkovsky had developed a firm understanding of beauty and harmony which are clearly reflected into his works.

Despite my previous critique on the comparison of Tarkovsky to other aspects of the film industry, namely Kubrick, these comparisons are not without a concrete basis and are in no way an insult. Where I believe these main comparisons between the two directors are derived from is most notably their film premises and their utilization of long takes. Both Kubrick and Tarkovsky are able to expertly utilize long takes to achieve effects that words and images cannot. However, the effect that these directors emulate are quite dissimilar. Kubrick’s long takes are able to invoke emotion into his audience, using these slow, drawn out scenes to display a feeling of suspense or induce a fear of the unknown. Throughout The Shining, the camera follows Danny as he maneuvers his tricycle through the winding hallways of the overlook hotel. Throughout this scene, viewers are at the whim of Kubrick as they have been subjected to continuous footage of Danny turning corners with no consequences for minutes of film. Kubrick’s long takes don’t necessarily add to the actual story of the film, but are directly aimed at the audience. Tarkovsky, on the other hand, implements these long shots to give further layers to his already beautiful and philosophical films. One of my favorite displays of these long takes are found in Stalker, a story of an expedition led by a guide to a mysterious location of supernatural power, simply known as The Room. When the main characters become a couple of feet away from The Room, Tarkovksy chooses to depict this moral dilemma with a 3 minute verbal and physical argument among the main characters. Constantly criticized for the slow pace, Tarkovsky slowness speaks volumes to his audience as it displays the tension between the three characters and the fear that presides over the room. Even after the characters decide, Tarkovsky responds with a five minute scene of the characters outside the door of the room, contemplating their decision and fearing the results. Tarkovsky does not have to specifically state what his characters are feeling, but the long take and the dreary silence say more than words ever could.