There has been an Awakening…: A Review of Star Wars The Force Awakens

Note: This is a spoiler free review for this film. 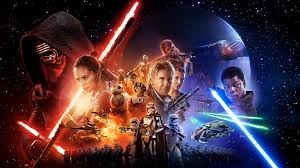