Batman: Mask of the Phantasm: The Dark Knight’s Forgotten Film 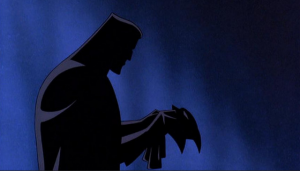 Never did I expect the opportunity to see this movie in theaters. This past Saturday, at 11:30 P.M., I attended the Batman: Mask of the Phantasm screening at the Coral Gables Art Cinema. Batman: Mask of the Phantasm tells the story of Batman struggling in a city that no longer trusts him, after he is blamed for the murders of mob bosses who are killed by a mysterious new vigilante, The Phantasm. This underrated movie was released in theaters in 1993, and takes place in the world of the critically acclaimed Batman: The Animated Series. I had the pleasure of finally watching, in my opinion, the best Batman movie ever on a big screen, eating popcorn, and with an audience reaction.

In Batman: Mask of the Phantasm, our dear dark knight is played by Kevin Conroy, an extremely talented voice actor, and the quintessential voice of Bruce Wayne. Conroy has now been playing Batman for over 25 years, in other animated shows such as Superman: The Animated Series and Justice League, as well as playing the caped crusader in video games such as the popular Injustice and Batman: Arkham franchises. What all of this means is that whether you’re a fan of Batman or not, you’ve probably heard Conroy as the dark knight before.

Conroy adds a sense of depth and sadness to the character, as we see Batman as a selfless and lonely man who does not live life to be happy, but to bring justice to the crime-infested Gotham City. While this is a theme that isn’t new for Wayne, Mask of the Phantasm makes Bruce Wayne actually question if his pursuit of justice is worth fighting for if it destroys all chances of someday becoming a whole and happy individual. Bruce begins to ponder on this question in a series of flashbacks when a woman named Andrea Beaumont enters his life, and eventually re-enters his life in the present. Andrea was played by Dana Delany, who would go on to play Lois Lane in Superman: The Animated Series.

Mask of the Phantasm focuses on these two characters, and how they’re troubled pasts separated them. Although Bruce and Andrea are the main characters of the movie, Mark Hamill’s Joker also plays a key role in the plot and arguably steals the show, as the villain often did during his appearances in The Animated Series. However, while the voice acting is superb, credit must be given to the writers, as the movie’s story is as engaging as each individual character. In a movie only a little bit longer than an hour, every scene must be significant, and every scene is. Mask of the Phantasm, simply put, is an excellent movie, and I can’t recommend it enough.

One Response to “Batman: Mask of the Phantasm: The Dark Knight’s Forgotten Film”