The Battle for New York Begins: A Review of Marvel’s The Defenders 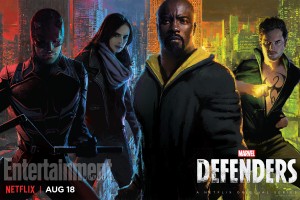 The anticipation for the Defenders has been building up a few years now, and the Netflix Marvel superhero team-up has arrived. Daredevil, Jessica Jones, Luke Cage, and the Iron Fist have come together to fight for the people of New York. Who are they defending New York from? If you’re up to date with the Marvel Netflix shows, you’ve known about them for a while now. This secret organization of ninjas has been active since the first season of Daredevil, although at this point they weren’t referenced by name. They’re called The Hand, and in this eight episode series, they’re led by a women known as Alexandra, played by Sigourney Weaver, famous for her role in the Alien franchise. Now that I’ve given a basic description of the show, how good is it?

Defenders, in my opinion, can be compared with the first Guardians of the Galaxy, in the sense that the best parts about it are the heroes and the scenes that they share together. I found the really great moments of the show to be the interactions between the four main characters. Daredevil continues to be Hell’s Kitchen’s strong and honorable hero with a deep faith in God. Jessica Jones continues to be the witty detective who gives the impression that she doesn’t care, but deep down continues to be a hero that fights for the city. Luke Cage is still the symbol of heroism not only for the people of Harlem, but for all of New York. And Danny Rand? Well, he’s still learning how to be “The Immortal Iron Fist.” When these heroes come together, their efforts and teamwork save New York, and the success of the show.

The villains, however, didn’t work as well. I don’t know if it’s only me on this side of the argument, but I feel that Sigourney Weaver’s character didn’t really do anything significant. Weaver played the part well, but I feel that the only interesting part about Alexandra’s character was that she was played by a famous actress. Also, though some of the less important villains of the show were more interesting, they didn’t get more of a chance to shine. Maybe this is because the show didn’t have enough time to fully develop with its eight episodes.

Ranting aside, I still believe that the show did a great job on the part of the heroes. I guess it follows the build of many of the Marvel Studios movies (although there are exceptions), where the hero is great, but the villain isn’t as good. I just think this is a bit disappointing, as up until now, each of the Marvel Netflix shows have had villains who are just as awesome as the hero.