Battle of the Sexes is Back Tonight 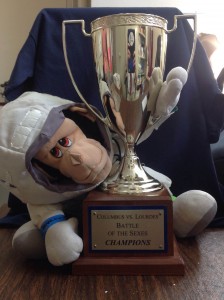 In a world, in which no school dance existed during the second semester, Battle of the Sexes was born. The friendly competition between Our Lady of Lourdes Academy and the Columbus Explorers, held to determine which is the better single-gender school, was conceived in an attempt to replace the “Sweet Dreams Dance” – a second Beach Bash at which participants were encouraged to come dressed in their PJ’s. Thus, a “Homecoming for the Second Semester,” as Mr. Crossman called it, was born. Mr. Crossman, who was head of S.A.C. at the time, told me that the competition which took place for the first time during his final year as moderator was actually Mr. Delgado’s idea. Yes, before Mr. Delgado and Mrs. Hidalgo teamed up at CCNN to win every student broadcasting tournament there is, Mr. Delgado and Mrs. Hidalgo were S.A.C. Club moderators. Mr. Delgado (around the 2007-2008 period in Columbus History) brought the competition (of which there may have been a similar one during his and his brother’s years here) to the next level. What had begun as a simple film competition between the two schools evolved into a full-fledged talent competition. The show consisted of a music video (which may have contained some trash talk by each school about the other), a skit, a dance, and a talent portion. The madness was organized by a Master of Ceremonies -M.C. for short. However, despite its success and extreme popularity, the competition petered out after about five years from the year of its creation.

So, is this just a lesson in Columbus history? No; It’s an invitation. The fabled Battle of the Sexes is back! After a five-year absence, the competition has returned – and it will take place tonight (Wednesday, March 16th) in the cafeteria! Come and be a part of Columbus history and support your school against the Bobcats! It’s an opportunity you don’t want to miss. Tickets are on sale now for $10 in the S.A.C. Office; they’re selling fast, get some soon! And let me know if the competition’s narrator sounds familiar.