Black Mirror’s Hang the DJ: Our Feelings in Dystopia 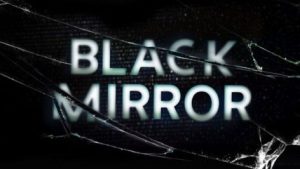 Black Mirror has recently garnered a mainstream following and, with the release of season 4, the show has seemingly became a house hold name in pop culture, an adjective frequently used within social media for describing anything that reveals the grim concepts of our integration of technology into our lives.

It is in these foreboding messages that the show has truly shined, and its timing couldn’t be more impeccable, sometimes echoing travesties occurring in political and technological spheres and sometimes predicting them. I could go to great lengths analyzing and deciphering Black Mirror’s cryptic oracles of the future and studies of technological and human dynamics, but this analysis is not for that. What I would like to focus is what enables Black Mirror to transcend other every-day distopian sci-fi: its character. Amidst the shroud of social disconnect instituted by the next big technological trend, the universe of Black Mirror is pervaded with characters who preserve the humanity that is absent in their inorganic society. Black Mirror’s most memorable characters are those that strive to achieve intangible aspects that were once considered innate qualities of human nature – love, pain, social cohesion, genuineness – but have become entrenched in technology’s mere concessions of the lack of these qualities. Although the characters may originally indulge in these technological delights, as the show progresses, their slow realization of the malicious nature of their world leaves them with two options: continue to partake in the dystopian hysteria, allowing themselves to be sedated by the opiate of comfortability, or beginning their path towards genuine humanity, a state of mind that seemed to be lost when we turned to technological dependence.

With Black Mirror’s arsenal of 19 episodes, it was difficult to pinpoint just one to explore and analyze. “Hang The Dj” is one of the few episodes that focus on social discord and our own lack of connection with each other, rather than placing the most consideration on the technology at play within the episode, and throughout its 51 minutes duration crafted a dauntingly beautiful analogy of human attachment a world where we swipe right on pictures of strangers and drift from relationship to relationship in an unfathomably rapid succession. It is due to these principles that I chose to write this review. (Well that and my blatant bias towards The Smiths).

The episodes introduction is peppered with world building for the episode via dialogue. We are introduced to a setting that echoes themes of both The Bachelor and Yorgos Lanthimos 2015 film The Lobster. Hopeful 20 something’s have signed themselves up to “The Hub” a mall-like structure where participants are romantically paired with each other by their Coach, an A.I that echoes a similar structure and voice of Apple’s vocal assistance, Siri. Each romantic pair has an arbitrary expiration date superimposed onto their pairing, as some pairs have an 11 hours expiration date and others have a date spanning multiple years.

This episode places our relationship under a microscope and reveals truths that have manifested within our relationships in today’s age. The story centers around the concept or acquainting yourself with seemingly the perfect match for you, yet at the wrong time. The “deadline” for newly matched couple Amy and Frank only lasts a few hours, and, despite having an enjoyable time, doesn’t assemble into anything much. Frank is immediately enamored with Amy, and Amy follows suit. Both Amy and Frank speak to their Coach about their infatuation with each other, only to be reminded that because they are in “The Hub” they do not have control over their partners and that they are at the whim of the computers arbitrary match making system. Rather than each other Frank and Amy are paired with new partners, Amy being paired with a man who has been in the system for many years while Frank is paired with an insufferable partner. Despite Amy’s early enjoyment of her partner, she and a Frank ultimately adopt the same frame of mind of longing for each other. Black Mirror explores a haunting yet magnificent reality of life of finding someone who holds such strong emotional value within you that they begin to bleed into your stream of consciousness, in this case nearly a year after your last contact with them. Despite the sheer pleasantness of being able to find someone of such value, these delights do not go without consequence. A masterfully explanatory montage depicts Amy wading through a litany of relationships while her same monotonous facial expression persists.

(Spoilers from this point on)
As the cards line up in our protagonists’ favor, they are granted another opportunity to be together, via the Coach. Recognizing the value of their chance pairing, the two vow to never check their expiration date. The earliest phases of their relationship is as magnificent as they could have ever hoped for, they have found what they consider to be their perfect match. But how can Frank not check the expiration date? How can he go on knowing that one day the relief that pulled him from the depths of meaningless mundanity would leave and subject him to the same drudgery that we was all too familiar with. Ring a bell? A friend once told me that relationships and events are defined by their ending. And it seems that this concept is what today’s people are accustomed too. Frank ultimately cracks and checks his expiration date, but with this act, he accidentally activated a glitch within the system that leaves him with nearly a fraction of the 5 years he was granted with Amy. This may be passed by as simply an advancement of the plot, but in this moment “Hang the Dj” exclaims its most impactful prophecy of our relationships. This preoccupation with finality becomes nearly what it was so afraid of. Black Mirror tells us to not enjoy our destination, but our journey from A to B. The perfect relationships end with the other person dead. It’s a fundamental misery of human life. The end is inevitable. But until then, we have full control over whether or not we will make experiencing that “end” worth it.

The title of this episode references the song “Panic” by The Smiths. The summation of these lyrics are a request for the DJ at a venue to be “hung” due to playing songs that show no value to the main character. “The music that they constantly play says nothing to me about my life.” Amy and Frank are at the whim of the Coach or in this instance the DJ, a DJ who has spun and entrenched Amy and Frank into decisions that are not theirs and experiences that mean nothing from them. In the climax of the episode, Amy and Frank revolt against “The Hub”, seeming to “hang the DJ”, eliminating the puppet master that has ruled their lives, and for the first time in the episode, form their own path.

One Response to “Black Mirror’s Hang the DJ: Our Feelings in Dystopia”