Chimichanga!: A Review of Deadpool 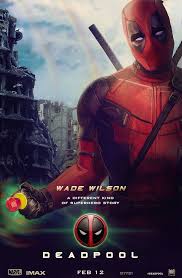 Even the biggest of comic book fans have to admit, superhero movies have become very formulaic. It’s not a bad formula by any means, nor does it harm the movies we’ve seen in recent years. I’ve loved most of the superhero films that have come out lately and I’m more than happy to be getting them, but it would be nice to have a change of pace here and there. Seeing something different isn’t always a bad thing, which is why such films as Guardians of the Galaxy have done so well. In the case of Deadpool, being different is a very good thing. As Wade Wilson a.k.a Deadpool himself says to the audience, “Surprise! This is a different kind of superhero story.”
The plot follows ex-mercenary Wade Wilson, who, after meeting the girl of his dreams, discovers that he has terminal cancer. When Wilson is offered a cure by a mysterious organization, Wilson accepts only to be subjected to a series of deadly experiments. Now armed with new mutant powers, Wilson goes after his captors to get revenge and rescue his girl from their clutches.
In recent years, the character of Deadpool has grown extremely popular with fans of the comics due to his raunchy, fourth wall breaking, smart aleck humor. He really is unlike any character in the Marvel Universe, or comics in general for that matter. Because of this, a movie for the character was inevitable, and after his terrible portrayal in 2009’s X-Men Origins Wolverine, fans were desperate to see the real Merc with a Mouth on the silver screen. Luckily for those who was un-satisfied with his previous on screen incarnation, this film gives the character the love he deserves on the big screen. This movie truly is Deadpool as he should be.
Ryan Reynolds was always the perfect choice to play Deadpool. This is one of those instances where the actor absolutely owns every aspect of the comic character, not just in looks, but in mannerisms and attitude. Reynolds’ portrayal feels as if the character jumped straight out of the pages of the comic and onto the big screen, he truly encompasses every part of Deadpool from the physical aspect, to the humor, and even the heart of the character. This will no doubt be one of those roles that fans will point to as a perfect representation of an iconic comic book character
Although Reynolds’ Deadpool is without a doubt the main draw of the film and star of the whole show, there is a surprisingly great supporting cast that joins him. The character of Vanessa, portrayed by Morena Baccarin of Firefly fame, was a great love interest for Wade Wilson. She’s not a typical damsel in distress by any means, portraying a tougher, rougher love interest than usually seen in a super hero film. She is able to counter Wade’s remarks and give a few great lines of her own. The characters of Colossus and Negasonic Teenage Warhead were also entertaining choices from the X-Men team to place in the film. They provide another layer of humor to the film that I personally did not see coming. They play a bigger role in the movie than I had anticipated them to and I’m very happy to see the film makers use them in the way that they did. Ed Skrein also provides a pretty good villain in Ajax. He’s doesn’t try to make this villain more than it should be. Ajax is a dangerous antagonist for Deadpool, while being kept a very simple, but serviceable villain. Overall the acting and characters are one of the strongest parts of the film and are great from start to finish.
As with every super hero movie, action scenes are to be expected and Deadpool has quite a few. These are well shot and fast paced moments which provide for some intense sequences throughout. The actions scenes, however, are not the main focus of Deadpool. The center of attention lies in the film’s humor. Deadpool is without a doubt one of the funniest superhero movies ever. The writing is smart, providing some very quotable lines and good references to other superhero films. The film also pokes fun at the current formula of superhero movies and film studios in a very clever manner. Thanks to Deadpool’s ability to break the fourth wall and talk directly to the audience, his quips are made even more hilarious.
Overall, Deadpool is one of the funniest superhero movies of all time and is a breath of fresh air in the superhero genre. Thanks to incredibly smart dialogue and excellent performances, Deadpool is able to provide a new take on the superhero movies of today, and give audiences a memorable movie experience.