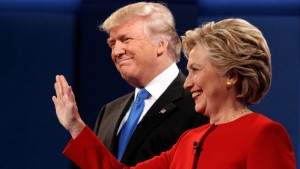 After a night of lies and shouts, the first presidential debate finally finished. Both candidates performed poorly as Hillary Clinton was weak and boring while Donald Trump lied throughout the whole debate. It was truly one of the most unusual debates in modern-day politics.

Although Secretary Clinton focused on the issues, she dragged on her statements and appeared to be boring. Hillary Clinton also missed multiple opportunities to expose Donald Trump on his lies and his past comments.

However, Donald Trump went off to a strong start slamming Clinton on her trade deals and her political correctness. He appeared to take complete control and was very fierce in his attacks. Later on, Secretary Clinton was able to rattle Trump and took him off course as he began to lie in all his statements. He even said towards the end of the debate, “We lose at everything.”

Clinton and Trump also fought on their campaigns’ transparency. Clinton fought Trump on the issue of his tax returns. He then argued that he was, “Under audit.” It is important to note that no law would be broken if Trump chooses to show tax returns while he is being audited. Trump turned on his attack after by saying, “I will reveal my tax returns once Hillary releases her 30,000 emails.”

Although both candidates performed poorly, Secretary Clinton was more calm and better prepared than Donald Trump who proved to be ill-tempered.

By Robert LinforsSeptember 27, 2016Editorials, NewsLeave a Comment on Clinton and Trump Engage in First Debate