This past Veterans Day weekend, the Columbus Band had four outstanding performances at Friday night’s playoff game, the St. Timothy Fair, the Miami Beach Veterans Day Parade, and at Arbetter’s for the annual Dr. Burrus Day. Led by Mr. Cooper, the band played their standard set of rock, funk, and jazz songs for their audiences.
Friday night, Columbus vs. Gables High, the band filled the first half of the game with loud and energetic rock and roll tunes. The band played their own versions of classic songs such as “Layla”, “Enter Sandman”, and “Walk This Way”. At halftime the band featured a special guest singer, Shanda Roberts (mother of Elijah Roberts, junior football player), who sang “Killing Me Softly” while the young musicians accompanied her. She was truly the highlight of the band’s night and it’s safe to say that the Columbus Band, along with Ms. Roberts, won the halftime performance. 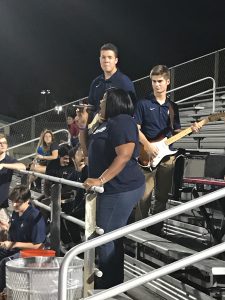 Saturday, a small group of band members played a quick set at the St. Timothy Fair. While on stage, the musicians played along with an elaborate laser light system that was hooked up to the amps. Fair goers enjoyed a spectacular set of good music with lights and lasers moving to the songs.
Early Sunday morning, the Columbus Band members arrived in South Beach to be a part of the annual Miami Beach Veterans Day Parade. The band set up their gear on top of a large flat bed attached to a pickup truck. Six musicians, Mr. Cooper, and his daughter Kayla stood on the flat bed while driving and playing music down Ocean drive in the parade. Flying high on the truck were the American flag and the Columbus flag, waiving as the band played rock and roll for veterans, active duty military, and their families. Though very hot, the temperature did not stop the Columbus Band from showing their patriotism and appreciation for the brave men and women who have served in the United States Military. The parade ended on Ocean Drive and 17th street but that didn’t stop the band from doing what they do best. Playing music. The truck’s driver, Bill Brown (father of Billy Brown, senior band member) made a left turn onto 17th street and the band continued jamming. They played songs continuously down Collins Avenue for those on the sidewalk, in restaurants, and for the drivers on the rode. Back on 5th street, the band parked the car, put instruments in their cases, and ended one of the most meaningful performances that they’ve ever been apart of. 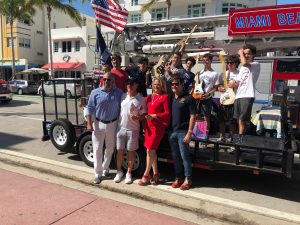 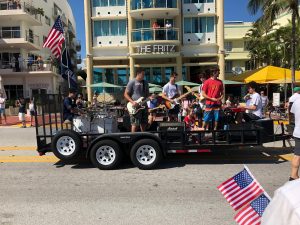 Monday, the last day of the long weekend of performances, the Columbus band, also known as the Arbetter’s House Band, made their return to Arbetter’s to play for the annual Dr. Burrus Day performance. Set up outside the restaurant, customers enjoyed great live music and even better food! As per request of Dr. Burrus, the band played a plethora of classic rock songs by Lynyrd Skynyrd and Jimi Hendrix. It was an awesome showcase by the Columbus Band and a great way to end their epic long weekend of performances.
Musicians:
Lucas Rodriguez-guitar
Joey Rodriguez-guitar
Billy Brown-guitar
Danny Collazo-bass
Erik Rodriguez-trumpet
Greg Joa-Trumpet
Ethan Trueba-keyboard
Joey de la Viesca-bass
AJ Gonzalez-drums
Xavier Curiel-Sax