Columbus to Continue Dominance Over Belen 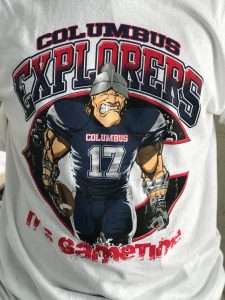 Tonight, September 22, the Columbus Explorers football team will face off against Belen for the thirteenth consecutive year, and will hope to continue the winning streak of thirteen games over the Wolverines.

This year’s game is highly anticipated; Explorer fans ranging from future Explorers to alumni have already purchased tickets. The game is already sold out, meaning the Explorers and Wolverines will compete in front of over 3,000.

Senior linebacker Shaun McReynolds will be playing this game for the fourth consecutive year, and he gave some insight on what the atmosphere is like. “It’s a loud and crazy game; it feels like the fans are right on top of you and the energy they give off definitely motivates us to play harder.” The words of the four-year letterman can sum up how the Explorers will feel on the field Friday night. The traditional rivalry between the Explorers and Wolverines usually creates a wild atmosphere in whatever venue the game is played in.

The Explorers kicked off the season very well against Mater Academy: the defense shut out Mater’s offense and the offense put up forty five points. The Explorers also had a tough fight against the Northwestern Bulls, in which they lost 24-7. The Explorers will meet the Wolverines at 7:00 p.m. tonight, Friday, to bounce back from the bitter loss.