This past Saturday, March 24, the Columbus debate team competed in the national qualifying tournament at Miami Beach Senior High. Once again, the team dominated the competition in Lincoln-Douglas and Policy Debate by taking all of the districts qualifying spots in those two events for the second year in a row. 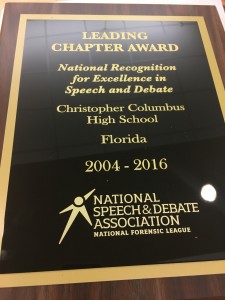 Leading the way for the Explorers in Lincoln-Douglas debate, team president Javier Navarrete finished the district tournament undefeated and walked away with a district championship. Closely behind him, with only one loss throughout the tournament, junior Brian Izquierdo secured the second qualifying spot and punched his ticket to the National tournament in Birmingham this June. The explorers beat out La Salle, Michael Krop HS, Ransom Everglades, and Miami Beach in the qualifier.
Also qualifying over the weekend, juniors Angel Toro and Daniel de Izaguirre switched events and qualified in policy debate. They will be joining the speech team members who already qualified earlier last month, Thomas Barrera and John Little, to make it a grand total of six Columbus students who qualified out of the district. This is the second year in a row Columbus has qualified the most number of students to the National Speech and Debate Association National Tournament out of Miami-Dade County.
The team as a whole was recognized with the distinguished Leading Chapter Award as well over the weekend. This award is given to the team that has accumulated the most amount of “trophy points” in a school year.
Thanks as always for the support,
Randall Martinez