Over the weekend the Columbus Debate team had a great showing at the first South Florida Catholic Forensic League tournament at Western High School in Davie. This tournament was the largest in SFCFL history with over a thousand students competing from over 30 schools in the Miami-Broward area. A special thanks to Assistant Coach Dan Ciocca for preparing our Lincoln-Douglas debate students this week on the qualified immunity topic. 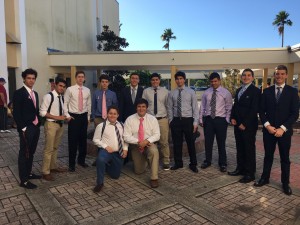 Leading the way for the Explorers, Senior Thomas Barrera finished in 4th place of Dramatic Interpretation performing his rendition of Empowered: How one girl scout nearly destroyed the World’s economy by Don Zolidis. Thomas performed for 4 rounds of competition and earned 1st place rankings in 3 of the preliminary rounds.

Also having an incredible tournament, Junior Raphael Crespo racked up four wins and one loss in Varsity Lincoln-Douglas debate. In the novice division, Junior Marcos Cibran and sophmore Jorge Soto had a great first tournament by finishing with a 3-2 record. The guys were debating the merits of qualified immunity for police officers. 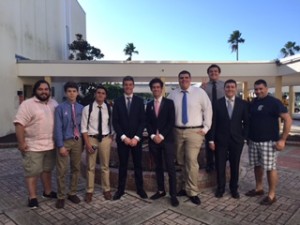 In Public Forum, we had four teams competing in the novice division. The sophomore team of Ethan Gaunaurd and Sean Hodson had a fantastic first tournament, finishing with a 3-2 record. The public forum guys were debating the harms and benefits of the Internet of Things.

The team travels again this weekend, to the University of Florida – Blue Key tournament in Gainesville.