Columbus Education in the L Building 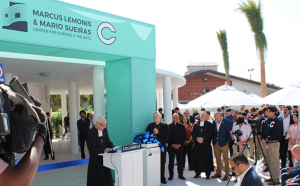 On Thursday, April 28, 2022, Christopher Columbus High School held a ribbon cutting and blessing ceremony for its newly constructed building. The Marcus Lemonis and Mario Sueiras Center for Science & the Arts is named after alumni Marcus Lemonis and Mario Sueiras, who made generous contributions to the $25 million building. The building is intended to provide students with a new and improved space for education in science and the arts, a goal that Columbus has been accomplishing since the building was opened.

The building contains a variety of features such as exhibition and performance spaces, indoor parking, a lecture hall, a locker room for the basketball team, and a large open atrium. In addition, it houses the Robert Sanchez Family Robotics & Engineering Lab/ Muñoz Family Innovation Hub, May and Frank Rotolante Art Lab, and Lou de la Aguilera Family CCNN Studio, as well as a music space. These unique features of the new building will play significant roles in improving education at Columbus.

Education will become more interactive with the space and technological resources of the new building. This is especially true for Columbus’ STEM programs. As Science Department Chairperson, Mrs. Mercy Aycart, states, “The new center will provide students with the ideal space and resources to foster STEM skills, such as critical thinking, communication and creativity, which are essential for their future success.” These skills will be developed through features of the STEM space such as 3D printers, CNC machines, a laser cutter, a robotics field, and a flight simulator. Mr. Armando Rodriguez, an engineering teacher and the moderator of the STEM and Robotics clubs, says these features have made education much more interactive, hands-on, and experience-based, which helps students understand concepts at a deeper level. This improved educational experience will “put Columbus at the cutting edge of STEM education,” as Columbus President Mr. Thomas Kruczek has said.

Columbus’ broadcast news program, CCNN, has also undergone significant changes with the transition into the new building. The CCNN studio has moved across campus from the Mas building to the new one, which contains several unique features that open up an array of educational opportunities. Although there were difficulties in transferring equipment and setting up, club co-moderator Mr. Omar Delgado says that CCNN has adjusted to its new fully functioning studio. Within the new space one can find unique features such as black magic design technology and new iMacs for editing. These technologies will make education in journalism and graphics design classes much more immersive and interactive. As Mr. Delgado comments,“The future of education, I think, is going to be very immersive. It’s not going to be so much of someone listening and kids taking notes. It’s going to be more of an experience, it’s going to be more hands-on.” This “learning through doing” approach will significantly improve the dynamic of education at Columbus, which is why Mr. Delgado is so optimistic. “With CCNN, the sky’s the limit,” he states.

Mr. Keith Cooper, a music teacher and the Tri-M Music Honor Society moderator, shares Mr. Delgado’s sense of optimism. He appreciates the new space the music classes have in the new building, especially the recording studio. According to Mr. Cooper, a student from the University of Miami came to observe the new space and recording studio and commented it was nicer than the one at UM. This anecdote demonstrates the significant advancements Columbus’ music program has made with the transition into the new building. As Mr. Cooper comments, Columbus’ music space will create a “fully encompassing musical experience” that will facilitate students’ development of musical careers.

Moving forward, the Marcus Lemonis and Mario Sueiras Center for Science & the Arts will continue to make education at Christopher Columbus High School more interactive and immersive. The future of education will be much more experience-based, which will elevate programs from visual and performing arts to STEM and open up a multitude of opportunities for Columbus students. As President Kruczek states, “[the new building] will help propel our young men forward and prepare them to attend the best colleges of their choice.”

By Nicholas DiazMay 27, 2022NewsLeave a Comment on Columbus Education in the L Building