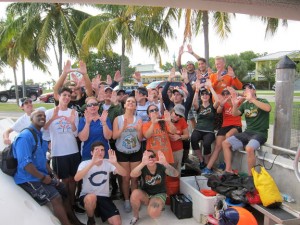 Nurse sharks, bull sharks, tiger sharks, oh my!
These are three of several shark species Ms. Taylor’s AP Environmental Science class went on the hunt for this past Sunday. They set out from Key Biscayne with a crew of University of Miami graduate students on an eight hour shark-tagging adventure. The purpose of this expedition was to gather information for University of Miami’s extensive database on sharks off the coast of Miami. Statistics such as the shark’s length and width were measured, blood samples were taken, and tags were put into the sharks’ fins, all of which is used by University of Miami graduate students to research morphisms of sharks in the area.
The expedition started off on a 46 passenger charter boat filled with about 25 Columbus students, 10 University of Miami graduate students, and a lot of equipment. The captain, Captain Nick, quizzed the class on their extensive knowledge on sharks by asking questions such as, “What is the purpose of the ampullae of Lorenzini?” He explained the process of tagging sharks before setting out to sea. The charter boat took the students to a fishing spot near Stiltsville where ten buoys were set out about 200 yards apart.
After about an hour of waiting the boat drove back to the first buoy where University of Miami students showed the Columbus students how to real in the line using a yoyo; there was no shark on the line. Columbus students reeled in the second yoyo, still no shark. Students took turns reeling in buoy lines until the fourth one. There was tension on the line after Columbus senior Joseph Alvarez pulled it in a little. The graduate students took the line from him, because it is too dangerous for rookies to reel in a shark, and began fighting the line for ten minutes to bring in the first shark. It was a black-tip shark. Tensions were high on the ship for it was the first shark of the day. Once the shark was reeled onto the  black platform of the boat four graduate students wrestled the shark steady and sat on top of it. 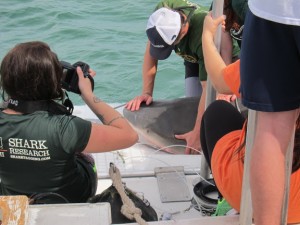 They placed a watering tube into its mouth so it could get oxygen through its gills, then the Columbus student took action. The first job performed by Columbus students on each shark was to spray water on the shark’s eye in order to test for its nictitating membrane, an inner protective eye lid.  If the shark’s eye twitched, the nictitating membrane was working, which meant the shark wasn’t under too much stress. If the membrane failed to twitch, the shark was under too much pressure so the tagging and measuring had to be done in a rush in order to get the shark off the boat as quickly as possible. Next, a Columbus student would measure the shark in three different places using a measuring tape. First they would measure the front of the shark to the beginning of the tail, then from the front of the shark to the fork of the tail, than from the front of the shark to the end of the tail. After the measuring was done, the fun began. Another student would use scissors to cut off a tiny piece of the shark’s dorsal fin so it could be taken back to the lab for testing. Then finally another student would tag the shark. This process consisted of a student getting a tag with an ID number that was connected to a spike. They would use a mallet and hammer the spike into the shark’s dorsal fin. The purpose of tagging the shark is to have an identification if it were to coincidentally be caught again. This way, the University of Miami would be able to track specific shark’s growth and migration patterns. The shark tags had a phone number to contact if a fisherman were to catch the shark and the University of Miami offers a cash reward to anyone who re-captures a tagged shark and calls the number. 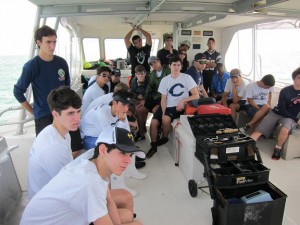 For seven sharks this process was repeated. The students caught nurse sharks, bull sharks, black tipped sharks, and black nosed sharks. The head of the shark tagging adventure, a University of Miami graduate student, said Columbus’ trip was the most successful trip they have had in a while. He also mentioned how we were by far the best school to be with in terms of cooperation and fun; Columbus brought loads of school spirit on the trip. Now that’s what you call C-pride! Adelante!