Comparing The Predator to the 1987 Original 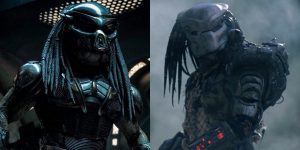 Last weekend’s The Predator is, unfortunately, another disappointing sequel to the classic 1987 film. The movie has its enjoyable moments, but it lacks a few qualities that could’ve made it a more entertaining experience. After rewatching the original Predator starring Arnold Schwarzenegger, I was more able to compare it with the new addition to the franchise, and see where Shane Black’s The Predator went wrong.

The first major decision in the storytelling of the movie that I feel may have hurt the film was its cast of human characters. Specifically, I had a problem with the band of soldiers that help the protagonist against the Predator(s) (more on the multiple Predators later). Because the team of soldiers meet the main character, a sniper named Quinn McKenna, during the first act of the movie, they are only seen as complements to McKenna, very seldom do they have their own independent focus, making it harder for us to care about them. In Predator (1987), we’re introduced to characters who, for the most part, all know each other well, and the movie is convincing in showing these old relationships through jokes and banter between the characters. That’s something that I feel is important to the dynamic of these movies, but it’s something The Predator (2018) lacks. The humor in the original has a deeper purpose, while the jokes in this year’s movie are there just to be there. And that can be a bit of a problem when the movie relies heavily on comedy, at least more than any previous installment. Even the Predators have some goofy, out of place gags.

While there wasn’t too much going for the movie when it came to the human characters, the Predators, or at least one of them, were the main thing that still made the movie enjoyable. There are two Predators in this story, and the better of the two is the more classic style of Predator. This one evokes a feeling of nostalgia, and the scenes that it’s in shine throughout the movie, which ends up being another problem. The first Predator is barely in the movie at all, and its replacement is a giant CGI hybrid Predator that isn’t nearly as cool as the classic one. Plus, they treat the idea of “bigger and badder Predators” as if it’s something we’ve never seen before, even though that’s basically the plot of 2010’s Predators, which executed that idea better than this one anyway. So that basically leaves us with a taste of the Predator that I feel most people want to see, but are given a much less interesting Predator for most of the movie.

In general, The Predator wasn’t what I was hoping for as the jump-start to the franchise after eight years. As a fan of the Predator franchise, the movies and the actual monsters, I can’t help but feel disappointed with this movie. It has a bit too much comedy in it, in my opinion, and doesn’t do the Predators themselves justice. Of the four standalone Predator movies, I’d rank it fourth, with Predator (1987), Predators (2010), and Predator 2 (1990) being first, second, and third. It’s not a terrible movie, but it’s unfortunately anticlimactic. If you’re going to see it though, prepare yourself for the last minutes of the movie. I can’t tell if the last scene is hilarious, or just bad, but it’ll probably make you laugh.