The Craig Misfire: A Review of Quantum of Solace 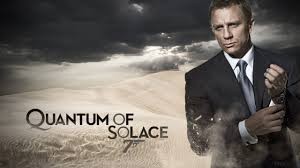 Expectations were running high after the success of 2006’s Casino Royale. Daniel Craig was being hailed as the best Bond since Sean Connery himself and fans were eager to see James Bond return for the 22nd film in the franchise. Unfortunately, Quantum of Solace was not quite what fans were hoping for.
After the death of his love, Vesper Lynd, Bond (Daniel Craig) is seeking revenge from the organization that took her from him. When he discovers that the mysterious organization known as Quantum is planning to eliminate a country’s most valuable resource, Bond go rouge to end Quantum’s scheme and avenge Vesper.
From the start, Quantum shows that it is no where near what Casino Royale was. In all honesty, this is a disappointing sequel for many reasons. The basics include hyperactive editing, a muddled plot, and a relatively weak villain. The opening action sequence clearly establishes that a new director is behind the camera. The scene is made up entirely of various shots taken from various angles and edited in a manner that rarely gives viewers the chance to absorb what’s on screen. Even basic conversational scenes, the few that there are in this film, have multiple cuts to various angles of the same person who is speaking at that moment. Quantum cannot hold a shot for more than a few seconds, making it a very sloppily edited film. The constant cutting made my head hurt after awhile, making me miss the longer takes from Casino Royale. Had quick editing been done in a tighter and well developed way, perhaps it would have worked better.
The pacing of the film also feels very off. This could be due to the fact that it has a very short run time and had too many action scenes to put in. There are hardly any moments to relax, jumping from one action scene to the next. These scenes are not necessarily bad, but the editing makes them difficult to follow.
The plot is very muddled and not worth talking much about, with the characters being the better aspect of the story telling. Craig develops his Bond even further in this film, which proves to be a plus for it. Aside from returning cast members such as Judie Dench as M, and Jeffery Wright as Felix Lighter, no one else really shines. The villain is a relatively weak one especially after Le Chiffre of the previous film, and the Bond Girls are no where near as great as Vesper Lynd. The multiple comments of the previous movie only serve to remind you what was once there, with the returning cast being the only good aspects to make it to the sequel. It’s not that any of the new characters are bad, it’s just that none of them are particularly memorable either.
Overall, Quantum of Solace is a disappointing sequel to the great Casino Royale. The editing is hyperactive and sloppy and the story is a mess. Aside from Bond himself, none of the characters really elevate any thing and even though the action scenes are good, the editing ruins some of them. There’s no real need to see Quantum unless you really want to see every single one of Craig’s Bond Films.