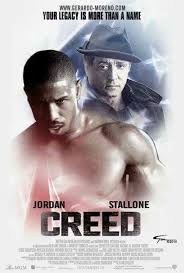 An upward trend seems to be the case for Michael B. Jordan. I mean, lately, he’s everywhere. In 2015 he starred in two major motion pictures, narrated an ESPN 30 for 30, and was even featured as a guest star on Running Wild with Bear Grylls. With an ascending career, Creed is a great example of things to come.

The original series of Rocky films (which are on Netflix; check them out) are centered around the fictional character Rocky Balboa, who is played by Sylvester Stallone. Rocky is a no-name boxer that gets thrown into the spotlight, and is given an opportunity at the world title. Balboa’s opponent? Apollo Creed – the best boxer in the world.

Creed, on the other hand, focuses on Adonis Johnson: Apollo’s forgotten son from an affair outside of his marriage.

Determined but unknown in the boxing world by last name Johnson, Adonis struggles with the task of making a name for himself. Throughout the movie, he often finds himself living in his dad’s shadow, forcing him to live up to some hefty expectations.

If anything in particular stood out to me about Creed, it’s that the film really depicts “today”. It’s up to date with references to things such as iCloud, and even features a scene where Wembley Stadium is filled with cell phone lights from engaged fans. To top this all off, the energy of this generation is portrayed almost perfectly by Michael B. Jordan.

Lots of emotion is displayed by all parties involved, meaning this movie was very well acted. The script was great, too. There’s action right from the get-go that will force your eyes to pay attention, and enough minor twists and turns to have your emotions rattled.

Believe it or not, special effects weren’t much of a factor. Lots of intense choreography and practice took place for the fighting scenes. Apparently, Michael B. Jordan was literally knocked out at one point.

Ryan Coogler – the director – clearly tried to make this movie feel as real as possible. Even the ESPN show Pardon the Interruption is featured (although only for a short time, its the little details that separate a great movie from the rest) in the semi-fictional world of Creed.

Some critics are calling Creed the best movie of the year, and although I disagree, I do believe it deserves to be in the conversation.

Does Adonis prevail? Go watch the movie and find out! This film is definitely worth the ticket price.