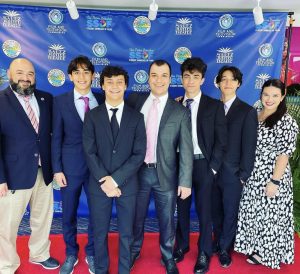 What is the Film Club?

The Christopher Columbus Film Club allows students to learn the basics of film production. The focus of the film club is to “write, produce, edit, and screen student-created films.” Giving students the necessary knowledge and skills to create films through hands-on experience allows them to intricately understand the process of filmmaking. The Film Club submits their student-created films to competitions such as the Florida Student scholastic Press Association and Student Film Festival. Mr.Diaz, moderator of the Film Club, when asked the purpose of the Film Club said, “the main focus of the film club is to teach students how to properly pre-produce, produce, and edit film.” He believes that anyone can learn something from the Film Club “whether they are interested in going to film school or film just as a hobby.”

“Pre-production usually lasts about four weeks and production lasts about one week.” This is because the preparations for filmmaking need to fulfill all organization and time restraint criteria before the actual production. Pre-production involves assigning jobs to students, finding locations to film, and editing the script. Pre-production is often considered the most important part of the process as it sets the trajectory for the project’s outcome. Mr. Diaz believes that “There are certain positions you need; someone has to work the camera, someone has to direct…and the clapper is really the second assistant cameraman.” Mr. Diaz also mentioned that overlooked jobs like the clapper and sound operator are the “Achilles heel of independent filmmaking.” This will delay post-production because without organized scene/take management and clear sound the entire project has to be re-filmed. Post-production is mainly editing and reshooting scenes that didn’t come out well, “usually taking twice as long as production.”

The Film Club has a few types of movies they do: “All hands on deck films”, which require all members of the club to produce, “smaller projects” like one-minute films, and “contest projects” that give them specific prompts. The film club is currently in post-production for the film Lightsaber and The Hairdresser. Mr.Diaz welcomes all students regardless of experience who are interested in film into the film club.

By Charles ArencibiaMay 27, 2022NewsLeave a Comment on Film Club Paves the Way for New Filmmakers