The Future is Here: A Review of Back to the Future Part II 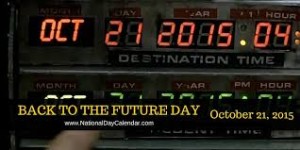 Today is October 21st, 2015. For Back to the Future fans, that means Marty McFly is arriving in his DeLorean with Doc and a new adventure will begin. Since it is Back to the Future Day, it seems only appropriate to review the film that has captured the imagination of movie goers everywhere since 1989.
In the second film of the trilogy, Marty McFly and Doc Brown must travel to the year 2015 to prevent catastrophic events from occurring. However, in classic Back to the Future style, time travel causes even more trouble for the duo when Marty returns to 1985 to discover a changed world caused by his trip to 2015.
What’s to be said about this movie that hasn’t been said already? It’s as funny and imaginative as it has always been. Even though some elements may be slightly dated, Back to the Future 2 holds up very well after all these years. Robert Zemeckis’ directing is creative and his aptitude for visual flare is still great today. The future scenes are still enjoyable, despite the fact that we know it all didn’t come true. The technology will no doubt get anyone’s imagination going wondering what the world would be like with the technology predicted. However, the best segments are after Marty returns from the future. Seeing the new world that was created by his time traveling is shocking to first time viewers. The disturbing new world in 1985 leaves an imprint on the viewers and it’s great to see. Going back to 1955 is a great treat for fans as well. Seeing the vents of the first film unfolding once again from a new perspective is very enjoyable.
The film is obviously very funny. All three films in the trilogy are hilarious in their own right and this one has its own unique humor to add. The jokes in the future such as Jaws 19 are very funny and the humor keeps up through the the film. Marty and Doc remain one of the funniest duos in film history. Michael J Fox and Christopher Lloyd bounce off each other very well and completely own their roles.
Overall, Back to the Future 2 still holds up today. The story is entertaining, especially for fans of the trilogy, the humor is spot on, and the relationship between Marty and Doc is as great as ever. If you haven’t checked this one out,you might want to get on that. Happy Back to the Future Day!

Back to the future 2Review