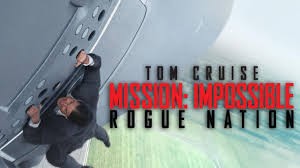 By the time the fifth movie of a franchise is released, many people would agree that it’s time to let the series go and let other films get a turn in the theaters. Very rarely is the fifth entry in a movie series any good. The Die Hard series learned this the … well, the hard way, when they released A Good Day to Die Hard. In short, the fifth time is rarely the charm. Mission: Impossible Rogue Nation, however, decides to go against that notion and become one of the best spy movies of the year and one of the best summer movies as well.

The last film in the series, Ghost Protocol, took everyone by surprise. Rogue Nation has been highly anticipated by fans due to the success of Protocol. Fans are wondering if it can surpass the great action packed film that came before. In the end, however, that is up to personal preference. There is no doubt that audiences will have a tough time ranking this one along with the rest of the franchise. No matter where it is placed, it is still a treat for movie goers everywhere.

The story follows super spy Ethan Hunt and his team as they try to reveal the existence of a secret organization which has been the cause of several acts of violence throughout the world. As they attempt to track the leader of this syndicate (the Anti-I.M.F as it is referred to by Simon Pegg’s character Benji Dunn) the team must deal with several deadly scenarios and several mysterious character attempting to stop them. Overall the plot is interesting and sucks you in from the moment it kicks off. There is hardly a dull moment through out the whole story and the various twists and turns keep audiences guessing the whole time.

As always, Tom Cruise is great as Ethan Hunt. It’s safe to say that Cruise has established himself as one of the most devoted actors in Hollywood considering how willing he is to hang himself out of a flying airplane for just one of the movies several action sequences. Cruise’s willingness to do his own stunts make the action sequences even more believable and intense. Cruise isn’t the only actor who shines here however. All the returning members of the I.M.F do a great job in their roles once again. Ving Rames, Simon Pegg, and Jeremy Renner all do a great job as their respective characters and seeing them all come together again is a delight to watch.

The veteran I.M.F agents are not the only ones who shine in this film. Alec Baldwin as the CIA director attempting to shut down the I.M.F is a great presence to have in the franchise and the villain portrayed by Sean Harris is definitely one of the better ones this franchise has had. The villains have in most cases been some of the weakest parts of these movies (with the exception of the sinister villain portrayed by the late Phillip Seymour Hoffman in Mission: Impossible 3). Ghost Protocol’s villain was probably the weakest the franchise had seen so far, so to see an interesting and menacing villain again is definitely a good thing.
Out of all the new characters however, the female lead portrayed by Rebecca Ferguson takes the prize of the best new comer to the series. The character is a tortured and compelling heroine and her scenes alongside Cruise are great to see.

It goes without saying that the action sequences in the Mission: Impossible series are some of the best in action movie history. Once again, this is due to Tom Cruise and his willingness to go all out. The scenes in this entry continue the franchise’s signature style. They are tense and leave you on the edge of your seat every time. You are constantly feeling worried for the characters and hoping that they make it out alright.

Overall, Rogue Nation is another great film for the spy genre and is in competition for one of the best movies of the summer. The action scenes are great, the characters are compelling and interesting, and by the time it’s all over, you’ll be overwhelmed by how great action just played on screen. This is one summer experience that should not be missed.