The Golden Road: The Story of the Grateful Dead

The Golden Road: The Story of the Grateful Dead 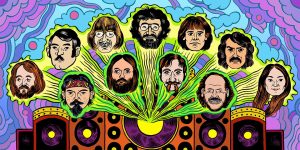 Over their long tenure of 30 years of concerts and nearly 3000 shows, the Grateful Dead has rendered itself a national icon in the psychedelic music industry. The Grateful Dead began its tenure in the music realm of the blues. After years of playing and performing blues, the Grateful Dead realized that no set genre could resonate among the people, but a combination of many. While they focused on psychedelic music, the Dead diversified and blended different types of music; they utilized bluegrass, rock, and folk with psychedelic seasoning.  Along with the Anti-war/hippie movements of the 1960s, the Grateful Dead thrived among their increasing number of followers. The band was originally comprised of Ron “Pigpen” Mckernan (Organ, harmonica, vocals), Jerry Garcia (lead guitarist, vocalist), Bob Weir (rhythm guitarist), Phil Lesh (bass), and Bill Kreutzmann (drummer). While this was the original group, this list underwent a multitude of changes.

As the band grew in popularity, a second drummer, Mickey Hart, and a new keyboardist, Keith Godchaux, were added to give the Dead a refined sound. Keith Godchaux eventually introduced his wife, Donna, into the group as a harmonic vocalist. Donna’s vocals were quite controversial and divided the Deadheads—Grateful Dead fans— population, however she would remain in the group for many years. After some years, Pigpen- the group’s original frontman- died from liver disease. While many thought this could end the future of Grateful Dead, the band continued moving forward and the next 4 years were arguably their best under their new leader, Jerry Garcia.

Jerry Garcia was the de facto leader of the Dead after the death of Ron Mckernan. His fantastic playing made the Grateful Dead distinct among the psychedelic groups during the 1970s and 80s. Garcia blended elements of a multitude of different music styles that he thoroughly enjoyed—blues, country, bluegrass, etc.—, leading to the Grateful Dead’s unique sounds. Garcia’s playing was recognized for his distinctive guitar playing, being ranked 13th in the Rolling Stone’s “100 Greatest Guitarists of All Time.” He was inducted into the Rock and Roll Hall of Fame in 1994 and was known as the most influential member of the band, which expanded along with its followers.

After 4 years of musical success, Godchaux and Donna quit the band. This lead the Dead to search for a new keyboardist, Brent Mydland. Mydland specialized in the organ, giving the Dead a more interesting, brawny sound. The Grateful Dead continued performing great shows throughout the 1980s until the death of Brent Mydland and the decline of Jerry Garcia’s health. Mydland was eventually replaced by Vince Welnick, however ideas of replacing Jerry Garcia became realistic and detrimental to the band. Garcia started taking time off of the band and ultimately stopped playing with them before his death in 1995. After Garcia’s death, the remnants of the Dead desperately searched for a new guitarist but none could match the level of skill and performance that Jerry brought to the table. Since then, the Dead have declined in musical presence, which normally happens to bands with such an impressive tenure. At the moment, the Grateful Dead tours with John Mayer, going under the name “Dead and Company.”

The Grateful Dead’s multiple years of fame left the world with many songs that took the listeners mind off of the harm of the world and into a lighthearted trance. Whether it be “Eyes of the World” or “Scarlet Begonias”, the Grateful Dead realized the importance of people identifying themselves as a community, rather than a random congregation of people. These ideas that the Grateful Dead utilized presented themselves as ahead of their time. When making music, Jerry Garcia noted that he was not making it so everyone could know the Grateful Dead name, but so that the band could give its music to its followers. This mindset is one that many should have, replace the barriers created out of our fears and differences and rebuild them with the ideas of community.