Hannah and Her Sisters: An Existential Tale for the Modern World

Ask anyone who the most well known writers of existential works are and many will respond with the typical, but wonderful, Camus or Kafka or Tolstoy or “What?” I feel that it is about time that Woody Allen’s name (Yes, I know, that Woody Allen) be thrown around in that topic as his works continuously paint this bleak reality of existential dread and pessimism to a T. 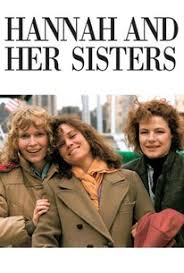 In the opening scene of Woody Allen’s masterpiece, the audience joins Hanna’s family for a picturesque Thanksgiving banquet, complete with turkey, compliments being given and received and the beauty of marriage and love. Isn’t that just beautiful? A real John Green story we have here. Woody Allen then goes off the typical directorial rails and utilizes narration of the characters thoughts and individual goals, revealing the troubling quest for meaning that plagues each character. From that point on we witness as each character struggles with their own existential crises. The film explores the core issues faced within its characters and their various attempts to find a sense of meaning or importance in New York City: a place of a thousand faces.

Elliot:
Played brilliantly by Michael Cain, Elliot is the first character who begins to express a disconnect in his life and dissatisfaction with his current situation. Despite his best attempts to avoid these harrowing desires, Elliot finds he cannot resist his wife’s sister, Lee. It is not that his wife, Hannah, has done anything to harm him, on the contrary she has done much more than Elliot could ever ask for. This sense of fulfillment and routine appears dull, leading him to seek a real thrill; a ray of light, piercing the gray cloud of his mundane life. But once he wins the heart of Lee, they begin to grow distant over time, perplexed as to why the potential they once possessed could leave so quickly. Their loss of affection could be possibly blamed on their love of the quest to be wanted, not the feeling itself. Both Lee and Elliot felt that their lives had needed a drastic change, but it was themselves who needed to reorient their perspective and values to one that suits them while simultaneously satisfying their internal needs.

Hannah:
One of the only main character who receives no real consideration throughout the film is the titular character herself. The thoughts of Hannah and never explored, her goals are never stated, the only time we see her is when she’s with another character. In a strange sense, this lack of any real development expertly paints the main flaws and goals of Hannah. The dynamic shared between Hannah and Elliot is clearly seen in this excerpt from the screen play for the film. In an argument between Hannah and Elliot, Elliot exclaims, “It’s hard to be around someone who gives so much and-and needs so little in return!” Hannah frequently asks her sisters if she is “too giving” often not receiving any clear answer. Hannah’s main dilemmas are often found in her lack of focus on her personal self and her own choice to place her own internal struggles on the back burner in favor of the issues of those around her. Although Woody Allen conveys a selfish, conceited message, but maybe, for our own good, it is required that we be selfish and conceited, fixing our own problems before attempting to assist others.

Mickey:
Playing nearly the same character he plays in every movie, Woody Allen stars as Mickey, an anxious and cynical hypochondriac. After a near diagnosis of a brain tumor, Mickey becomes terrified of the absurdity of life in an uncaring universe. Mickey becomes immediately depressed, contemplating if a life that can be taken away so easily is even worth living. Mickey seeks help from the conventional means of finding purpose: he studies Nietzsche, tries a series of religions, and attempts to find a grand explanation for what life is truly about. After a failed suicide attempt, Mickey leaves his house and wanders into a movie theatre where a film from the Marx Brothers is playing. In this moment of cinema, Mickey is dumbfounded as to why he could have ever contemplated suicide. Mickey inadvertently adopts a personal philosophy similar to the likes of Albert Camus. Mickey understands there isn’t any inherent meaning in his existence and there may not be a universal purpose that applies to him, but the beautiful simplicities of life and the joy that can be found in various aspects of life are enough to trump his existential dread.