Harold and Maude: Films Can Be Philosophy

A common misconception that many viewers share is that plot is simply what happens objectively during a film; a character goes here, does this, and achieves that. Although this phenomenon is usually represented in too many films, the best films are able to depict several layers of plot, not only how the story progresses but how the characters themselves progress. As films have become more focused on visuals and big moments, character development has been placed on the back burner as directors have deemed it unnecessary and unimportant to the plot. Although character development may not bring in millions at the box office, it is what truly links films to life. A film is able to truly effect someone when it depicts its character in similar situations to that of the viewer. Life imitates art and art imitates life. It is in character development that we find the underdogs, the doomed protagonist, and the character who receives everything they deserve. Without any real character development, the audience can only feel unattached to the character they are viewing. 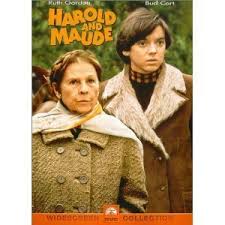 Harold and Maude is the first film that has ever really invoked emotion into me. There are many films that feature the same circumstances that are featured in the film, however through its character development it’s the only film where I have ever felt truly connected to a character. In this film we witness Harold, a wealthy young man with a love of death and a dislike of people, have a series of meetings and adventures with Maude, an 80 year old woman who has no real attachment to possessions and a zest for life. The opposite personalities begin to fuse and slowly effect each of the characters. There is no set objective for this film, no goal, no revenge, just the journey of two unlikely friends as they try to discover what it really means to be alive.

One of the definitions that the Merriam-Webster dictionary uses to define philosophy is the pursuit of wisdom. All films have the potential to grant wisdom onto their viewers through the situations their characters face and the lessons they learn throughout their journey. Many films fail to impose any knowledge on its viewers because of its depiction of characters only as a force in the plot and not as a character who have their own inner struggles and desires. The recent Suicide Squad film clearly depicts this dynamic of characters only used as forces. Yes, the film did try to make references to the characters back story and their own struggles. However, the only ways the director and writers were able to explain theses character were in lazy back flashes and literally stating in bullet points of character description. Viewers could not find any connection to the main characters because the audience never really learned who the characters were. The only real knowledge viewers had on the “suicide squad” were the countless ways they could kill unimportant goons.