“It’s heartening to see so many strange, new faces here today. I know my mom would be very touched, and probably a little suspicious, to see this turnout. So my mother was a very secretive and private woman. She had private rituals, private friends, private anxieties. It honestly feels like a betrayal just to be standing here talking about her. She was a very difficult woman to read. If you ever thought you knew what was going on with her, and, God forbid, you tried to confront that. But when her life was unpolluted, she could be the sweetest, warmest, most loving person in the world. She was also incredibly stubborn, which, maybe, explains me. You could always count on her to always have the answer. And if she ever was mistaken, and, well, that was your opinion, and you were wrong.” 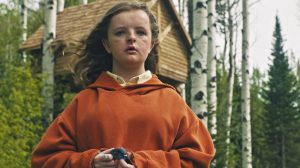 Grief is an expression experienced by even the most rugged and resilient human beings, and it is how Annie (Toni Collette) and her family deal with the passing of her suspiciously secretive grandmother that makes the 2018 horror film Hereditary an instant classic. This isn’t primarily a film about ghosts, or ghouls, or haunted houses. This is a story that involves one’s own personal demons being unleashed in wake of a familial tragedy, and the repercussions that stem from the latter itself. So if you want to check out this film because you think it will end up being your average horror flick full of clichés, I recommend you stay away from this one. As a matter of fact, distance yourself as far as humanely possible from this film. This is grief at its most unhinged and volatile. This does involve demons, but not the literal kind in a further sense of analysis. I cannot recommend this horror film to those who have weak stomachs, and those whose faith can easily be tested and corrupted. This is a film where evil is prevalent throughout the events of the story, and poses a huge threat to our protagonists. Without further interruption, let us dive into the expression of grief as it is portrayed in Hereditary. Spoilers are ahead, so if you haven’t seen Hereditary, I recommend you see the film before reading the upcoming analysis.

The film begins with the death of Annie’s mother and the grandmother of her son and daughter, Peter and Charlie respectively. Throughout the events of the first act, we see the emotion of psychological trauma portrayed in Annie primarily, as she seeks help in the form of a support group for those experiencing similar situations. She starts to feel much better given her circumstances, until a situation ensues with Charlie and Peter that knocks her right back down to square one. Charlie is required by Annie to go to a party with Peter which she believes is a school gathering, and is later proven to be an out-of-school hangout. Charlie is allergic to nuts, and she inadvertently eats a cake that has nuts, triggering an allergic reaction. Her brother rushes to drive her home, and as he speeds up, Charlie sticks her head out of the window to breathe, only to decapitate herself after hitting a telephone pole. Peter, in intense shock and trauma, rushes home and avoids telling his mother, leaving her to find a headless corpse inside the car the next morning. Now, the trauma that only Annie possessed has passed itself onto Peter, mutually through the death of another family member. 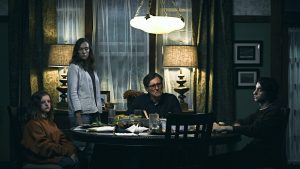 On another night, the family has dinner, in which an argument breaks out between the two affected, Peter and Annie. Annie proves to be insane, and it seems like she has completely lost herself through the expression of immense pain and agony. She erupts at Peter, saying:

“Don’t you swear at me, you little…..Don’t you ever raise your voice at me! I am your mother! Peter: Do you understand? All I do is worry and slave and defend you. And all I get back is that face on your face. So full of disdain and resentment and always so annoyed. Well, now your sister is dead. And I know you miss her, and I know it was an accident, and I know you’re in pain. And I wish I could take that away for you. I wish I could shield you from the knowledge that you did what you did, but your sister is dead! She’s gone forever. And what a waste. If it could have maybe brought us together or something. If you could have just said, “I’m sorry,” or faced up to what happened. Maybe then we could do something with this. But you can’t take responsibility for anything! So now I can’t accept, and I can’t forgive, because, because nobody admits anything they’ve done!“

This illustrates a disruption in the relationship of Annie and Peter, and is a monumental stepping stone on the quest to tear the family’s love for one another. Notice how there are no physical demons in the film to this point, and we are almost more than halfway. However, things become eerily supernatural when Annie’s grief escalates to the utmost point. One of her support group members volunteers to help her communicate with her deceased daughter through a seance, which catapults her into the occult practice that brings about her family’s demise. The seance goes awry, and Annie is rendered completely insane at this stage, as she scrambles to speak with her daughter’s spirit.

It is at this point that the malevolent “spirit” is unleashed on the family, and all of Ellen’s dark past is uncovered in her book as she is revealed to have been part of a cult that worships a demon looking to inhabit a male host. She throws the book in the fire, and her cloth starts to burn, illustrating the hold of evil that starts to terrorize Annie and her family after her encounter with the occult. She goes to her support group friend for help, but realizes that she has the same markings of the cult her mother was a part of, and locates a picture of Peter on an altar. She rushes back to the house, and locates her mother’s headless body with the cult symbols bloodied on the walls, and comes to realize that she is the source of the haunting. She begs her husband to burn the book to kill her and in turn end the poltergeist, but to no avail. The demon itself has attached to her, and the book burns as her husband Steve does the same. Annie, visibly distraught and in disarray, is finally possessed by the malevolent spirit. This can be construed as her demons now catching up to her, and doesn’t necessarily need to be rendered “supernatural.” But the eerie events do not stop there. Another spirit cements its hold on Peter at school, making him bash his head repeatedly and breaking his nose. Peter is just as guilty of grief as Annie, and both are doomed to bathe in the fruits of their eventual demise.

Peter awakens to find the incinerated corpse of his dead father, just as a possessed Annie chases him into the attic. Peter thinks he is safe until he witnesses his mother die via self-beheading by wire. Traumatized, Peter frantically jumps out of the window, dying on impact on the ground. The spirit, now free from Annie, enters the corpse of Peter, further connecting the two most important characters. Both levitate into a treehouse, where the cult members all kneel down in praise of the demon they have just personified and brought into the world. Now, a Christian may think an ending such as this, especially with the vigor and grit demonstrated in Hereditary’s final moments, is not spiritual and not religious. But mind you, this family didn’t have God in their lives. This family allowed evil to manifest itself into each family member, and tear them apart. There is a seance in the film, which proves to bring about the Graham family’s demise at the hands of evil itself. If anything, Hereditary proves to be a beautiful nightmare, a raw depiction of one’s descent into insanity, with no way out alive. The lack of faith allows fear and Satan to seep into a family that once stood together, and now fall apart. It truly is an amazing character study, and a legendary performance from actress Toni Collette, who gave one of the finest acting performances of the past decade, even decades. Hereditary is haunting, finite, mysterious, bizarre, inexplicable, and fantastic. It doesn’t feature the platitudinous tropes used by many horror films today, and opts for a slow burn and descent into madness. Do yourself a favor, and watch this horror tour de force of cinema.

By Andre ValeronDecember 8, 2020ReviewsLeave a Comment on Hereditary: An Anatomy and Deconstruction of Grief