As defined by Cornell Law, high speed rail (HSR) is an “intercity passenger rail service that is reasonably expected to reach speeds of at least 110 miles per hour.” Around the globe, the high speed rail service has been seen as a symbol of technological advancement and innovation. Countries like Japan, China and France have all seen success from their investments into high speed rail while other countries have not. The United States is one of those countries that is not able to successfully attain high speed rail.

While the United States continues to try to build high speed rail, current projects make this seem impossible. While the California and Texas rail lines have seen minor success, one project of interest is the Miami to Orlando rail line, operated by Brightline. The Brightline is a rail line that plans to connect South Florida (Miami, Ft. Lauderdale, West Palm Beach) to Orlando, cutting down travel times and making a trip more accessible to those who couldn’t drive such a far distance. Out of all the current high speed rail projects in America, the Brightline seems to have the most success. In this article, we will be looking at how this new line affect the citizens of South Florida and its effects on the community. 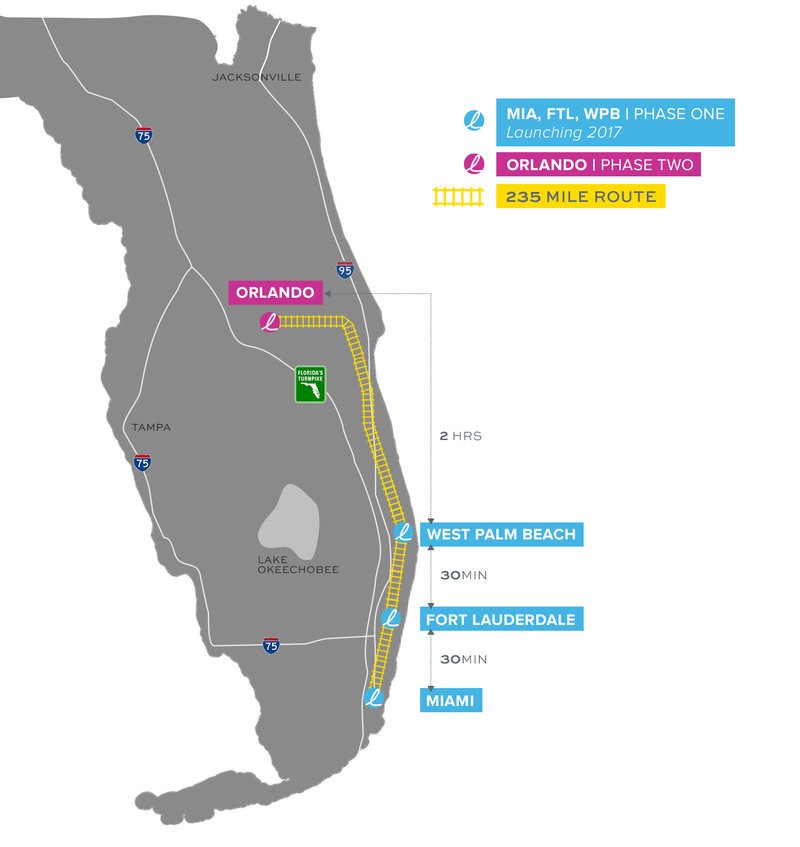 The Brightline opens many opportunities for those living in South Florida such as increased access to jobs and increased tourism.  In many ways, the ability to decrease travel times from Miami to Ft. Lauderdale, for example, could benefit the lives of many people including lowering commute times. However, on this same topic, high speed rail could be a real inconvenience when it comes to traveling to and from the station. For example, once you arrive in Ft. Lauderdale from Miami, you would need to rent a car, take a taxi, or ride share to your welcomed destination. To some, this option may be cheaper than driving, but for others it may be a large inconvenience.

Another way to view the rail line is through the tourism it can bring to the region. Imagine a tourist flying into Miami International Airport (MIA) and decide they want to go to Ft. Lauderdale. Instead of paying upwards of $100 on multiple taxis or Ubers, they can spend a fraction of that cost on a high speed rail ticket which will also take them to their destination faster. In terms of its use, tourism and travel will be the main driving force of high speed rail and its success for the future.

The Effect on CCHS

While a new high speed rail system may bring various benefits to the community, some members of the CCHS staff would say otherwise. In particular, Mr. De Tuya, religion teacher and the debate coach, says that a high speed rail system would be pointless and that Miami should invest in intra-city travel (public transportation) instead.  This idea might pose greater effects for the community, especially with people who might prefer to take the bus to school, for example. Overall, this would mean investing in different ways for people within the city to travel and get around. In this way, we can see that while high speed rail may produce positive effects for the state, its effects likely will not directly trickle into Columbus and its community.

At first glance, high speed rail might appear as a great alternative to current rail systems, the fact of the matter is that the arguments on both sides of the debate hold up to create an interesting discussion on whether this innovation should be further pursued in other regions and implemented. While a high speed rail system might bring about new forms of tourism and travel within Florida, there still are other sectors where this funding could be more useful. For example, public transportation like more efficient buses would garner immediate benefits to those who lack access to travel within our own community. At the same time, high speed rail could act as a placeholder to the same forms of public transportation, which creates more efficient travel to other cities. It is up to the values in which we base our decisions that will decide whether investment into high speed rail will produce positive or negative effects. Will we decide to value increasing access to other cities or within our own city? It will take time before our government makes that decision, which creates the ground for a substantial debate.

By Joseph AlonsoSeptember 27, 2022Opinion, PoliticsLeave a Comment on High Speed Rail in Miami