“People like to think of themselves as points moving through time. But I think it’s probably the opposite. We’re stationary, and time passes through us, blowing like cold wind, stealing our heat, leaving us chapped and frozen.”

Despite the fact that I am a relatively young man, I have always thought about the inevitability of time itself. Much like a clock or stopwatch, time moves rather swiftly.  Sixty seconds go by, and before you know it a minute has gone by. Sixty minutes go by, you have an hour. Twenty-four hours go by, you have a day. I’m a sixteen year old that often thinks back at how fast time flies. There’s this old saying that all our teachers and parents tell us constantly. It goes a little something like this: “Cherish the moment, because when you get to the top of the heap and you’re on the brink of leaving to college, there’s no turning back the hands of the clock.” Obviously, that isn’t the exact statement that everyone has been told, but they’ve all heard some version of it, I’m sure. I remember my first day of freshman year so vividly, it feels like it happened yesterday. But then I look at my calendar and I have to remind myself that two years have gone by, much to my shock at that initial realization. But that’s the blunt reality of time itself. The hands keep on turning, and the continuation of time and life is inevitable and rather onerous to combat. We are all mortal and will eventually pass into the next life, and I’m Thinking of Ending Things immaculately explains that lingering and painful thought. 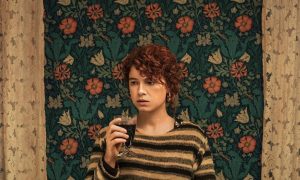 Charlie Kaufman is an inventive and brilliant visionary. In 2008, he penned and shot one of my favorite films to ever grace the big screen, Synecdoche, New York. While the film follows an eerily similar premise comparable to that of I’m Thinking of Ending Things, Kaufman connects Synecdoche to his previous masterwork Eternal Sunshine of the Spotless Mind to create an original hybrid that is both frighteningly realistic and wonderfully directed. I’m Thinking of Ending Things is what I like to label “a psychological horror that succeeds.” Like others around him, Kaufman is an expert on the human psyche, and conveys this through his main character, who is referred to in the cast and credits as “Young Woman” as she loses sight of who she truly is throughout the duration of the film. Jessie Buckley is truly magnificent in this role, as her  mannerisms, expressions, and timorous excerpts of dialogue demonstrate true trepidation and perturbation. Not to mention, Toni Collette and David Thewlis are phenomenal additions to the film, and play a big role in the largely ambitious and ambiguous plot line. This entire film is filled to the brim with such ambiguities that make you think about certain topics, such as life and the essence of time. This is truly an arthouse film, and one that isn’t afraid to take big risks at all. It truly is the best film I have seen from Kaufman, but Synecdoche is not far behind. Do I recommend you check it out? It isn’t for all audiences, as it obviously deals with eminently sophisticated leitmotifs, themes and ideologies that a simple mind wouldn’t understand. This is evidently a film of analysis, in layman’s terms. The only genuine path to understanding I’m Thinking of Ending Things is to analyze its convoluted themes and lore top to bottom. This is Kaufman’s one magnum opus, his one fine wine, and an instant classic that will be talked about for years to come.