Isle of Dogs: Wes Anderson does not disappoint

Whenever Stop-Motion Animation is featured in a major studio film, a large focus is placed on the meticulous work that was utilized to create a fluent and coherent film. Behind the scenes features will display the numerous minute movements and changes done to the figurines that were documented and later compiled into 3 seconds of film. Understandably, this labor intensive method can pose serious limitations on the film, requiring short cuts to be taken and exceptions to be postulated. However, this does not reign true in Wes Anderson’s Isle of Dogs. The laborious process serves, not only as an obstacle that Anderson has to overcome, but a vessel that allows him to execute feats not possible in live action film, transcending the limitations of reality. 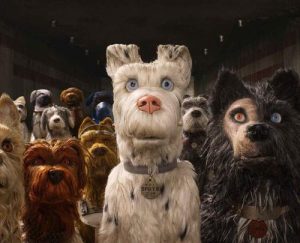 Wes Anderson was not born with this innate talent to create masterful stop motion. Nor was it perfected with his 2009 film Fantastic Mr. Fox. But with the developments in technology and practical techniques, Anderson was able to hone these skills until it reached its climax, Isle of Dogs. Unless out of necessity, Anderson frugally featured backdrops and scenery from previous scenes, henceforth, with this method, albeit arduous in nature, conjures the illusion of an expansive set, a key asset in the world building of Trash Island. Another impediment that clashed with Anderson’s typical style was the color palette he was dealt with. Because the film takes place in a location with trash in its name, the vibrant pastels that illuminated Wes’ previous films are supplemented for lackluster grays and sepias. Similarly to the stop motion animation, the difficult nature of these shades ultimately benefit Wes as he is able to conjoin the rustic imagery of the island with his typical vivacious style. Another improvement that can be found is Anderson’s manipulation and mastery of lighting in the film. Whereas some scenes in FMF may have seemed stagnant, Isle of Dogs manipulation of lighting adds depths to its sets and excels in motion. Silhouettes are frequented in this film, a technique that Wes has not utilized in previous films, especially not in a stop motion film. These silhouettes set the paradigm of Wes’ confidence and creative liberties that went into this film.
Wes Anderson’s technical feats are also reciprocated in the cinematic spheres. Set to the score of Alexandre Desplat and themes from classic Japanese films such as Drunken Angel and (one of my favorite foreign films) Seven Samurai, the movie takes place in a dystopian near-future Japan where dogs have been exiled to Trash Island. Here, dogs infested with “dog flu”, roam the grounds, skirmish with rival packs, and scrounge for any source of subsistence. Early into the film, we meet the main group of dogs, voiced by a brilliant ensemble cast of Wes Anderson usuals (Billy Murray, Edward Norton, Jeff Goldblum, Robert Balaban) as well as new, yet equally prominent members (Bryan Cranston, Scarlett Johansson), as they themselves brace the gritty conditions of Trash Island. What sets them apart is their discovery of “The Little Pilot”, Atari Kobayashi. Placed under the protection of the Mayor who instilled the law against the dogs, Atari’s dog Spots is the first subject to be sent to Trash Island. Distressed by this, Atari flies a plane to the island to find his lost dog. He teams with the uncanny cunning canines to not only look for his missing pet but to also put an end to the corrupt government and the malicious injustices that have beset mans best friend. Wes Anderson makes a Wes Anderson script and its everything a fan of his work could ask for; quirky, thoughtful, humorous, intelligent. I did not expect to laugh as much as I did in this film.
Unsurprisingly, this film does contain a few flaws peppered through the film, some more glaring than others. The most salient issue, personally, was the inextricability of the main pack of dogs. Although attempts were made to provide each character with their own backstory and personality, they all seemed to blend into one dog, which is a shame as the voice actors could have easily reciprocated their own personality and mannerism into the characters. The group of dogs nearly serves as a hive mind with the only discrepancies being found in quick one liners or whimsical rumors. But this flaw only applies to this group, as all the rest of the cast have their own distinguishable characteristics that play into the elaborate world building enacted by Wes. The only other significant blemish in the film is that a significant amount of “emotional scenes” seem terribly forced, as nearly 3 separate instances depict characters beginning to tear up, despite no significant cause. In a movie that’s already laced with harrowing stories, well developed emotional bonds and an established set of consequences, these unnecessary inorganic emotions are simply distasteful.
The last thing I’d Iike to touch on is what I previously referred to as an established set of consequences. From the earliest stages of development, it was apparent that despite its method of animation typically utilization in children’s films, this would be anything but. What truly serves as the X factor in this film is Wes’ ability to instill death and failure as a completely viable option. Death constantly plagues the film, conjuring an uneasiness that is completely foreign to the stop motion genre (exceptions including Coraline). This strongly engrosses the audience as nothing is certain, and the light at the end of tunnel frequently dwindles.
So go. Go to your local indie cinema. Skip John Cena’s new film Blockers and raunchy Hollywood comedies alike. Skip $15 for popcorn. Skip stop motion animation that adheres to the limitations of labor. This is stop motion as it’s meant to be. This is the harmonious blend of art and language. This is Wes Anderson’s Isle of Dogs.