Kaepernick as the Face of Nike 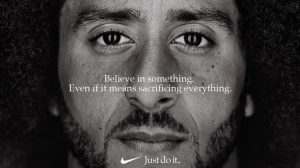 At first glance, Nike’s new ad campaign is like any other, featuring athletes like Serena Williams, Odell Beckham Jr, and… Colin Kaepernick. Nike announced on Monday, September 4, that Colin Kaepernick would be the face of their new ad campaign. As the announcement was released, controversy revolving Kaepernick rose again. In 2016, Kaepernick was the source of a controversial movement that involved kneeling during the national anthem during NFL games as peaceful protest against police brutality. This controversy reached the Oval Office, as President Donald Trump forcefully disagreed with the actions taken by Kaepernick. Since then, Kaepernick has become a free agent with no offers, yet he has received multiple humanitarian awards including the Muhammad Ali legacy award, GQ’s Citizen of the year, the Eason Monroe Courageous Advocate Award, and is now at the forefront of Nike’s new ad campaign.

This is not the first time Nike has made divisive moves within their ad campaigns. Nike placed Tiger Woods at the forefront of their global campaign after a DUI and sex scandal, however many are considering their decision to include Kaepernick as too controversial, or too divisive. Since the release of the ad, many people have destroyed their own Nike equipment and called for the boycott of future Nike equipment, while others have stood behind Kaepernick. Most notably from the latter group is John Brennan, the CIA director from 2013-2017, who tweeted that Kaepernick kneeled, “to give meaning to the words of the preamble of our constitution- ‘in order to form a more perfect union.’” Most notably from the former group was a former Marine who posted a picture with the Nike logo cut out. With this picture, he included the caption, “Former Marine. Get ready Nike, multiply that by the millions.” As Tuesday, September 4th, continued, Nike’s stocks dropped nearly 3%. Also at this time, #NikeBoycott was trending on twitter with a multitude of pictures of destroyed Nike products.

From an economic standpoint, the decisions revolving around Kaepernick’s involvement in Nike’s advertisement campaign are perilous to say the least. Economists have viewed Nike’s decision as precarious: raising attention and discussion, but taking sides on a highly politicized issue. Nike’s economists are mostly distraught because of Nike’s nearby competitors, Under Armour and adidas, who could capitalize on this ad campaign to forward their own campaigns in a non-politically divisive manner, and raise their own stocks as Nike’s falls.

This controversial campaign has led many to question the future of Nike’s company. Will Nike become bankrupt after this controversial ad campaign? Most likely, no. The actual boycott of Nike products will be a more arduous tasks than previously thought by fans. Nike has a contract with the NFL to be the exclusive provider of all sportswear for athletes and fans until 2028. This means that, to successfully boycott Nike, fans would not only switch brands for shoes, shorts etc., but they also would not be able to buy NFL merchandise. Nike has survived many socio-economic conflicts and this will not be the last time they include a controversial athlete, nor will many people remember about this conflict in a couple months or years. The truth is, Nike has undergone backlash for including Tiger Woods amid a sex scandal, Lance Armstrong throughout allegations of him cheating on the Tour De France, and many more controversial athletes. Even amid these controversial ad campaigns, Nike has and will continue to serve as a major player in the sports apparel business.