Karate, mainly seen as a form of self defense or a sport, has been gaining a lot of attention with the upcoming Olympics in 2021. Yet is it only just what it seems from the main point of view? To find out how much more karate is, I went to a nearby dojo – the Japan Karate Association, or by their other name Japan Karate Do International.

The dojo is run by the current master or Sensei, Yasuyoshi Saito, who was born in Japan and traveled to the America’s where he has taught for over 40 years.  I first asked him about what he thought karate was, and I was quite intrigued with his response. “Karate is a spiritual culture,” he said, “not only is it just physical to the body, but it also affects the person mentally.” Upon deeper explanation by this dojo karate is viewed as building to one’s character and self mind as a whole. Allowing the person to bring out more of themself and become a better person. “Karate is all of life,” he says. “It’s not solely to be used against an opponent, there is respect between them, and a level of honor to withhold upon them as well.” Karate trains the person to be well disciplined and respectful to those who they meet. It brings a level of humility, and also the idea to respect those who are above or older than you. Hearing this I gained a understanding behind what karate was meant to bring to someone, the idea of it being a sport was brought much later than when it was originally created. So what else is there to karate and what must somebody due to learn and truly master it? For that, I asked one of Saito’s instructors. 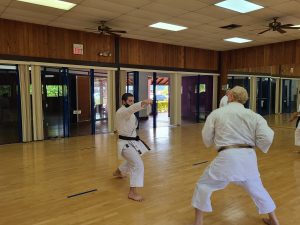 I asked Sensei Nicholas Mazzuca about what to do for karate and what you have to be aware of. He talks much about what to do and not to do, especcially in situations where you might need to use it. “Don’t place yourself in a situation where using it is a must,” he says. “If you have to, quickly finish and use it to stun or disable your opponent long enough to be able to escape, or allow authorities to arrive.” This means that karate is not to engage in just a full blown fight, it’s only meant to allow you to escape conflict if your life depended on it. Upon further questioning he says, “Don’t let your ego get to you, it allows for failure, which could be harmful depending on your situation.” This statement ties to the respect that karate brings, just because somebody knows karate doesn’t mean that it’s something to brag about or tell all of your friends. That would ruin what it was meant to be, and the respect that was supposed to come from it. Finally, I asked Nicholas what a new person should expect if they wanted to join this distinct tradition. “Train as much as possible,” he says. “Listening to what your instructor says or what occurs is vital. Just proceeding to practice one thing only once is not enough, repeated practice allows for refinement and better results, and being honest to how you performe allows you to learn and be better.”

This concludes my findings upon karate. It is more than just a sport or method of self defense. It is a culture and a tradition, bringing fundamental values such as honesty and respect for one another. Bringing refinement to the body, mind, and soul in general. So I ask you…what is karate? Is it a sport? Method of self defense? Or is it something much greater?

Special thanks to the Japan Karate Association/ Japan Karate Do International for the allowance of photography and interviews, for information about their work and business their website is jkimiami.com.

By Adrian CrosSeptember 9, 2020Features, SportsLeave a Comment on Karate, a Simple Sport, or Something Greater?