On Wednesday, April 26, American free speech activist Mary Beth Tinker visited Christopher Columbus High School, and hundreds of students along with faculty had the opportunity to hear what she had to say. 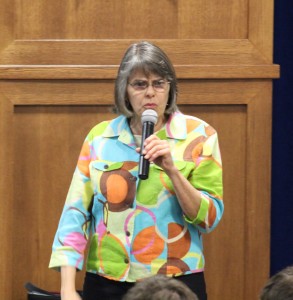 Tinker decided to come to Columbus, courtesy of Rho Kappa and Mrs. McCullagh, to “encourage students to use their First Amendment rights.” She shared that her father was a Methodist preacher who prioritized peace and understanding. When she saw the gruesome pictures of the Vietnam War, she knew she had to do something. She then wore a black band on her arm to school when she was just thirteen years old. 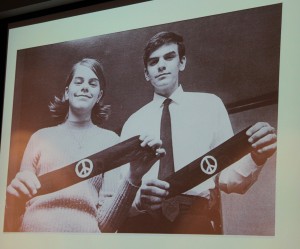 Hoping for a truce and an opportunity to mourn those who died in battle, she was suspended and received hate and death threats instead. In the end, she won her Supreme Court case against the Des Moines School District and helped permanently expand the rights of students. Tinker made it clear that kids and teenagers have potential, talent, and ideas equal in value to those of adults. Her fascinating lecture was accompanied by a PowerPoint and covered topics such as kids standing up for racial equality in the Birmingham March of 1963 and clean water in Flint, Michigan. She even took time to hand the microphone to the Columbus students in front of her for questions and comments. Tinker proves that ordinary people can make a positive, lasting difference.