It’s understood that a picture is worth a thousand words. But a true accomplishment is Mid90s ability to tell 1,000 stories in one motion picture. Jonah Hill’s Mid90s was marketed as a time capsule of Jonah’s childhood, an ode to adolescence. Although we cannot be sure if all of the events that transpired in his directorial debut actually occurred, it doesn’t matter, because it feels like it did. Mid90s’ story is not one of objective regurgitation, but the product of concentrated appreciation and reverence of a time period. An appreciation that can only be achieved in retrospective analysis. Transcribed in the grainy crispness of 16mm film lies a story on familial relationships and companionship, a story that reigns true no matter the decade.
The plot of Mid90s isn’t one of total originality, nor does it try to be. The tale of an outcast trying to fit in with a group of other outcasts was a reoccurring theme of the 90s, as films like Sandlot clearly highlighted this dynamic. Jonah Hill himself has admitted that the coming of age baseball film played a heavy influence on his filmmaking process. But what truly distinguishes Mid90s from other films of the same feather is its depiction of the 90s, a depiction that can only be achieved years after. 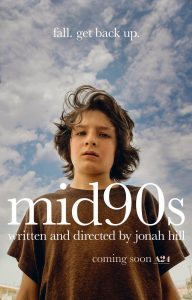 Ever since the creation of “cool”, there have been people trying to achieve it. And no decade has featured such social dysphoria as the nineties. In a time where soda brands were rebranding themselves to appear more attractive to a younger demographic that was teaming with guilt money, kids felt they had to get cool or die trying. Jonah Hill’s lucid directing style and Nick Huoy’s street smart editing are  essential components to capturing the palpable energy of the 90s. Although Mid90s lavishly incorporates the aesthetics of the 90s, it also subverts the negative social aspects of the time, namely the hostility emulated from each person in order to be cool. This hostility frequently manifests in jealousy, toxic masculinity and racism. Mid90s calls for an embrace of culture but warns against becoming indulged to a point of disenfranchisement from our family and true friends. The friends who stick around in times of anguish are those who are the most valuable. The rag tag friend group of different cultures and different backgrounds is fused by the seams of genuine friendship.
Jonah Hill’s ambitious directing and writing style has propelled his debut to critical acclaim, however, this very same ambition also serves as the films crux. A product of Hill’s attempts to encompass his time in the 90s into a film with a meager hour and 24 minutes, the film is infatuated with different themes and different character dynamics that, although are elaborately constructed, are not given enough time to truly be explored. Jonah just tries to say too much in too little time. But maybe this works in his favor. As previously stated, Jonah Hill was able to successfully and artistically display thousands of stories of childhood- the feelings that were felt, the images that were seen- into one film. These stories are all laced with their own meaning, but sometimes, in the blur of adolescence, we are unable to truly decipher the meaning of these events and it is only until we look back, 20 years later, we realize all that we have learned, and all that we have become, because of these past events. Mid90s isn’t a documentation of childhood, it’s an appreciation.