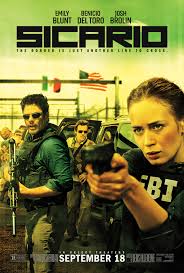 Portraying a young FBI agent thrust into a brutal reality, Sicario is one of the first movies to make some noise in the upcoming Oscar-buzz season. It is not your typical realist war movie. It definitely does not intertwine its fast-paced plot with subtle patriotic appeals, like The Hurt Locker or American Sniper. It is not your typical film surrounding the movements and inner workings of a drug ring. No…Channing Tatum, Ice Cube, and Jonah Hill do not bust the bad guys in the end. And most of all, it is not a date movie. However, it is one of the most gripping, enthralling films I have seen this year.

Sicario is directed by Denis Villeneuve, who has already demonstrated his talent in the suspense-thriller genre with his kidnap movie Prisoners. The pace of his well-crafted plot is nearly flawless and is paired with a fantastic cast. Fresh off her action-film debut in Edge of Tomorrow, Emily Blunt dons an American accent in her role as Kate Macy, an idealistic FBI agent relocated to a dangerous new assignment forced into a realm of unspeakable violence near the Mexican-U.S. border. Alongside Matt Graver (Josh Brolin) and Alejandro (Benicio del Toro), the rookie squad attempts to smoke out the most notorious cartel bosses in the blood-soaked town of Juarez.

The mood of the film is dark throughout; the action, bloody and superb. But the ability of the film to transform the archetypical cop movie into a psychological drama is what separates it from the pack. The movie delves into some controversial questions about some of our government’s questionable methods: Do we live in an age where the only way to stop the bad guy is to adopt his ways? The blurring of good and evil in an immoral world is the focal point of this film—a focal point that propels its story to new heights.