The Name’s Bond… : A Review of Casino Royale 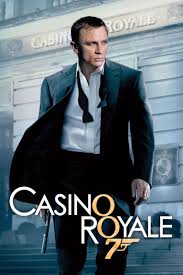 In 2006, the James Bond franchise was in dire straits. 2002’s Die Another Day was a critical and commercial failure, and how could it not? The villain’s evil scheme was to melt to polar caps and flood the world for goodness sake! It was time for a change. This change came in the form of a reboot and an all new Bond, James Bond. With the release of Spectre this Friday, it seems only appropriate to review Daniel Craig’s first outing as the British secret agent.
Armed with his new license to kill, James Bond (Daniel Craig) is sent on his first mission as 007 to stop a weapons dealer (Mads Mikkelsen) from winning a high stakes poker game at Casino Royale. As the danger grows ever higher, Bond learns the most important lesson of his life as a double o: trust no one.
Casino Royale was the reboot that the James Bond franchise needed. As mentioned before, the film previous to Royale was a big indicator that the franchise was starting to show its age once again. Casino Royale mixed up the formula by introducing a new Bond in the form of Daniel Craig, who plays his Bond closer to the cold assassin portrayed in the original novels by Ian Flemming.
We learn from the black and white opening that this Bond is very new to the game, but deadly none the less. Even the opening credits exemplify what kind of Bond the film is portraying. Unlike all the opening credits of every James Bond film aside from Dr. No, there are no silhouettes of women dancing across the screen and only a focus on Bond’s violent nature.
Every action scene in his film could be the final action scene of any run of the mill action movie. This however, is not a run of the mill action movie. The practical effects are astounding, especially those in the parkour construction site scene. Craig clearly gave his all, performing as many of his own stunts as possible. All the practicality of this film adds a level of gritty realism that the franchise had been lacking in.
The characters are the center piece of this film. Bond has never been explored this deeply, focusing on what his killings and work does to him as a person. The villain of Le Chiffre is perhaps the most grounded of any Bond villain to date. He’s not simply out to rule the world, he has a genuine reason for doing what he does. If he does not win back all the money he lost, his life will be lost. There has not been a Bond villain quite like him before. The popular “Bond Girl” is also brought down to a believable level. Eva Green plays Vesper Lynd as a strong independent woman who is experiencing the horrors of espionage for the very first time. She’s the most relatable Bond Girl for several reasons, and is also the one to finally melt Bond’s cold heart. It may have been done before in On Her Majesty’s Secret Service, but this time, there’s something special about Vesper that no other Bond Girl can match. She can rival Bond on a mental level like no other love interest has before.
Overall, Casino Royale is a tense film packed with stunning action scenes, believable characters, and an intriguing story to boot. Backed up by an impressive musical score, a serious tone, and pitch perfect direction, Casino Royale proves to be one of the best, if not the best, of the entire Bond franchise. If you haven’t checked it out yet, be sure to give it a shot before Spectre comes out this Friday.