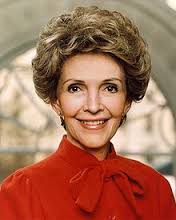 On March 6, 2016, America lost a devoted and passionate First Lady, Nancy Reagan. Mrs. Reagan passed away of congestive heart failure at her home in Los Angeles, California at the age of 94. She will be buried at the Ronald Reagan Presidential Library in Simi Valley, California next to her husband, the 40th President of the United States, Ronald Reagan.

Mrs. Reagan was known for her elegance, grace, and love for America. As First Lady, she started the “Just Say No” anti-drug campaign which focused on protecting young people from drug and alcohol abuse. She also renovated the inside of the White House. The renovation added glamour and beauty to the White House that had been missing since the time of First Lady Jacqueline Kennedy. From 1981-1989, Mrs. Reagan was annually voted one of the world’s ten most admired women in a Gallup poll and three times, she came in at number one.

Married for 52 years, President and Mrs. Reagan were known for their strong love for each other. Whenever he gave a speech, she would always look at him with “the gaze” a sign of true love between two people. When President Reagan announced in 1994 that he had been diagnosed with Alzheimer’s disease, he wrote, “I only wish there was some way I could spare Nancy from this painful experience.” He also wrote, “I now begin the journey that will lead me into the sunset of my life. I know that for America there will always be a bright dawn ahead.”

Nancy Reagan will forever be remembered for her wonderful years as First Lady and the affectionate care she showed for the man she loved.