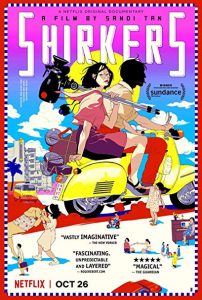 As Oscar seasons grows near and critics exchange linguistic blows of who will win best picture or which actor will take home the gold, there seems to be one category that, despite it being what I believe to be the most competitive area in the entirety of the ceremony, has not been given the proper exposure that it has earned over the last year. This field is none other than that of documentaries. Whether it is the critics favorite Won’t You Be My Neighbor?, the pop sensation Three Identical Strangers or the artistically brilliant Netflix produced Shirkers. It’s too early to come to a consensus on which film surpasses the others, and although many predictions have the Mr. Rogers focused documentary Won’t You Be My Neighbor? leadings the category, I believe that Shirkers is a film that, despite not featuring the Oscar-flavored viability as Won’t You Be My Neighbor?, is able to precisely and elegantly familiarize its audience with a story that is so rich in genuine human emotion that the audience can’t help but feel deeply connected to the docs characters throughout the film until its riveting ending.
The music industry is peppered with stories of bands who gave their first live performances in the garages of their houses, making sure not to play too loud to avoid swift judgement from their parents. Maybe the reason why we find the stories of bands who came from garages so endearing is simply the order of values; that is, how music, for the sake of music, was always first, and the other externalities followed suit. Despite trading the humid and cramped environment of a garage with the lush foliage and vivaciousness of Singapore, the sentiment still stands. Both situations pulsate with originality and genuineness. Throughout the documentary, director Sandi Tan includes scenes from other films, films that served as inspirations for the young auteurs. What these montages lend to the film is a clear appreciation of the medium, a medium that they hope to leave better then when they found it.
Very rarely does the subject of a documentary get to be the main proponent in the production of said documentary. It is a shame, though, that this is such a infrequently occurring phenomenon, as it is clear that the director and star of Shirkers can lend both personal anecdotes and also outside observances. The manner in which the documentary was filmed was clearly self reflective, as a lucid medley of interviews, personal letters, animation, history lessons and scenes from both the original Shirkers and other movies propel Sandi Tan’s film, enabling it to successfully capture her subjective feelings for the story. Because of the observational nature of documentaries, directors often run the risk of coming off as uninvolved and lukewarm to their topics. With Sandi Tan’s nearly first person perspective, however, these risks do not exist.
The standard form of a documentary is usually composed of two parts: story and analyses. Abiding to this form is what launched 3 identical strangers into stardom as an engaging story was complemented with a thought provoking post analysis. And it was in Shirkers closing minutes that I realized that this film would be a genuine force in the upcoming Oscar season. Following up to the ending, the documentary had chronicled the fruitless attempt of Sandi Tan and her friends to produce a movie. The movie itself was produced and awaited distribution once the producer, the 60 year old American Georges Cardona, finished the last touches. Instead of receiving the film, however, Sandi Tan only received ambiguous letters from Cardona, with each being sent at an increasing interval of time. These letters followed until silence. Georges Cardona had disappeared and with him, the film. It was only until 20 years after that Sandi Tan began to find some remnants of the film. Sandi Tan recalls one of her final moments with Cardona, and discusses how he had brought her to a hill to film a scene for the movie that she could not recall putting in her screenplay. Cardona would subtly display to her and her only that the camera he was filming with had actually never had any film in it to begin with, and he wasn’t capturing anything with it. Although confused at first, Sandi Tan looks back now in retrospect and realize this is may have been Cardona’s way of letting her know what had he planned on doing after the film finished. But she’s offers another belief. In the documentary, Sandi Tan recalls:

“There’s a scene in my script
where Haryo discovers
there’s no film in S’s camera.
She tells him, ‘It doesn’t matter,
because when you look through the hole
and go ‘click’ it catches something
or at least your mind catches something.’
You don’t need film. Just the action
of doing that helps you remember.
What was he trying to tell me?
‘Film or no film,
you must remember this.”

In a movie ripe with an appreciation of cinema, this one comment drastically shifts the outlook both the viewer and the director have towards the situation. Near the end of the documentary, a montage shows all of the people, all of the locations, and all of the experiences, that came to fruition by both shooting the movie and shooting this documentary. Shirkers tells us that outcomes are often arbitrary, and more often don’t go the way we expect. To find solace in this roulette, the majority of appreciation must fall on the progress made in order to arrive at its destination. Furthermore, the multiple realities that spawned because of this outcome. After the events in Shirkers took place, Sandi Tan became a notable film critic. Her friend went on to direct one of the most commercially successful film to ever come out of Shanghai. Maturity is a salient theme throughout Shirkers (Sandi Tan remarks that Catcher in the Rye is one of her favorite books), and the ending is only a facet of this. Conclusively, Shirkers proves that maturity is inevitable, and the harsh realities of life follow suit, but the moments we share until then, whether or not we can live an adolescence of value, will be what makes the future worth experiencing.