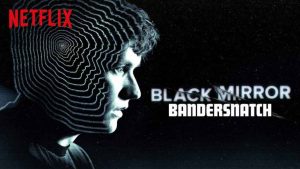 Since I have no intention of obtaining a healthy amount of sleep until graduation or death via exhaustion (whichever comes first) I have decided to cover Netflix’s ambitious new film, Bandersnatch. Derived from Lewis Carroll’s 1871 poem Jabberwocky, Bandersnatch is the name of a threatening creature, one of great power and little remorse. Within the poem, Carroll warns to “Beware the Jubjub bird, and shun The frumious Bandersnatch!” The title isn’t the only reference to Lewis Carroll’s works, as rabbit holes and rabbit imagery are constantly frequented within the over 5 hours of film. The episode itself could also be seen as a rabbit hole, as with each decision the viewer becomes more intertwined in inescapable realities, realities whose consequences the viewer wished they’d have the ability to avoid.
The ambition of the film’s structure is met with an equally ambitious storyline. Ranging from horror to blatant meta-comedy, (one storyline going so far as to call cut on the film in order to let the director tell the actor that he has gone off script) it’s easy to see that the show’s creators truly bought into this new style, and were willing to throw everything they had at the audience. I was originally worried that these convoluted story lines would eventually cave in on themselves like a poorly set up house of cards, and believe me the show came close, but one of the endings, an ending I believe is the “best ending” (a concept youtubers and twitter users seem frantic to find) not only clears up these storylines, but utilized them in order to express the message they were originally intending to achieve. But I’ll get into that later. I feel the most discussed claim is whether or not Bandersnatch still carries the old torch of the Black Mirror essence. It’s clear that many people see Black Mirror as merely a lesson on Technology=Bad, and if Bandersnatch were to be viewed in this lens then the answer would be that this episode does not carry the same technological portent as those prior. On the other hand, when Black Mirror is seen as a philosophical show, one that often covers themes of human choice, the duality of man, the
political scene in the modern age, and a multitude of others, each covered in a consistently profound and intuitive way, then Bandersnatch doesn’t just carry the torch, it ignites the flame to never before seen heights. The expectation of Black Mirror to be Technology=Bad is not only unappreciative but it is also a willing choice to avoid engagement on a much more personal and salient level. It’s no surprise that the two episodes that are constantly ranked the lowest on lists are two that don’t have heinous technological innovations, but rather feature potent political profiles that speak volumes of the current state of western politics (The Waldo Moment and The National Anthem). Bandersnatch’s 80’s setting places it in a time that has not yet been punctured by the realities of previous episodes, but even without them it remains as one of the most harrowing episodes to date.
With the popularity of choose your own adventure books and video games similar to the Tell Tale series, it’s only likely that this format would be eventually adapted to cinema. It was just a matter of when. And more importantly, who. The minds at Black Mirror seem to have been the ideal curators of this format, as they not only excel in using the medium to tell a story, but also simultaneously push the medium to its limit. It takes years for mediums to be re-examined through a meta lens and have its conventions flipped in order to create another concept from that movement (post modernism in art for example, or the French new wave). Bandersnatch makes itself about itself, as it’s choose-your-own-ending style isn’t just a proponent of the story, but a component of the story itself. Stefan, the stories protagonist, nearly loses his sanity at his inability to, fittingly enough, decide his own fate, but rather remain at the whim at you, the viewer. Constantly phasing from dream, to drug induced hallucination, to reality, Bandernsatch explores the realities that are conjured with each decision we chose, and chose not to, make. Flowcharts on the internet illustrate each chain of decisions and their ultimate decisions. These story lines often intermingle, lead to dead ends, or reach the same conclusion, in hopes of illustrating that true choice does not genuinely exist, but rather only the illusion. At one point in the film, Stefan directly states that he is taking away choice from his audience, and rather offering them only the illusion of it. I spent hours upon hours attempting to navigate the multitude of realities, with each ending seemingly more disappointing, and more mortifying than previous. At the end of every cut scene, the viewer is given an option to return back in the storyline to correct the mistakes that led them to that decision. I started to believe that I was trapped in conflicting storylines and hard to follow paths, until I reached the ending that cleared everything up, the ending that didn’t offer a means of going back to correct things, an ending that I consider to be, the best.

*Spoilers from here on out*

I met many dead ends before coming to this ending. Each ending had a more brutal finish, but as the brutality increased, so did the rating my game received. Both Stefan and the writer of the work he attempts to adapt had to undergo some form of psychological detriment in order to complete their works to the best of their abilities. In this instance, grief does not become a black and white concept, as the pit falls displayed throughout the episode constantly offer new reiterations of grief. After toiling through different realities, I was finally offered one I had never expected. After gazing into the looking glass, a mirror that brought Stefan back to the day his mother was killed, he was able to rewrite history, and get his toy back, thus allowing him to disembark on the train that would later derail and kill originally only his mother but now both of them. As child Stefan begins his journey to the train, Laurie Anderson’s “O Superman” sets the backdrop, as Anderson sings
“So hold me, Mom,
in your long arms. So hold me,
Mom, in your long arms.”
With the crash, present day Stefan closes his eyes at his therapist and never wakes up. He leaves behind a world where his father is still alive. Where Colin is still alive. Where he never has to kill his father. Or kill the CEO of his workplace. Or ever make Bandersnatch. So often do we become so focused on trying to navigate our grief that we fail to find the center, as if we remain stuck in a maze where we just continue to navigate the situation were in, rather than backtracking in order to find the cause. Stefan goes to the heart of his grief, the death of his mother, and embraces the situation, knowing that if he would continue to run, pain only laid ahead. In a style similar to the ending of the 2013 film Mr. Nobody, Stefan chooses not to choose, to not be at the whim of his prior choices, and of the viewer. As the screen is illuminated with gentle fluorescent light and the smooth melodic song carries them to certain death, Stefan is finally free.