The Night HE Came Home! : A Review of John Carpenter’s Halloween 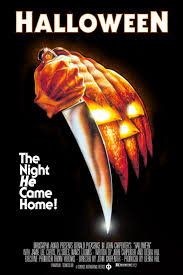 It’s that time of year again, folks. The pumpkins are being carved, kids will be trick or treating, and scary movies are being watched. There’s no doubt that Halloween will be one of the many films viewed on October 31st. It has been imitated many times since its original release back in 1978, but it remains one of the most haunting movies ever made, even to this day.
The plot follows high school student Laurie Strode (Jaime Lee Curtis) who on Halloween night is stalked by the masked Michael Myers (no, not the actor). As Strode and her friends attempt to survive the wrath of Myers, his psychiatrist, Dr.Sam Loomis (Donald Pleasance) scrambles to capture Myers before it’s too late.
The opening credits alone could send chills down your spine. John Carpenter’s score is one of the most eerie in movie history. His score, however, takes a back seat to his brilliant direction. Carpenter knows how to create tension filled scenes, making sure that the audience is genuinely scared and not just jumping from loud and sudden noises. Modern horror movies are over reliant on the jump scare, but Carpenter knows better than to rely on cheap tricks and clichés.
Carpenter’s ability to maneuver through the genre shows not only in his camera work and music, but also in how he directs his actors. Carpenter is able to pull great performances out of every actor in the film, elevating it further. Jamie Lee Curtis and Donald Pleasance do great as the two heroes of the film. Curtis gives a believable performance while Pleasance remains cool and collected as he hunts for his patient. The real star of the show though is the villain himself, Michael Myers. The white mask and silent demeanor only add to the creepiness of the character. His breathing is haunting, and the way his tolerance for pain makes him seem like an unstoppable force. Overall all the characters serve their purposes, and serve them well. They may fall into the usual horror characters, but at least they do it well.
Overall, John Carpenter’s Halloween remains a timeless classic in the horror genre. The tense direction, chilling music, and great performances make this THE movie to watch during this time of year. Many have tried, but few have been able to replicate the true terror that comes with Halloween.