No One To Trust, Everyone To Hate: a Review of The Hateful Eight 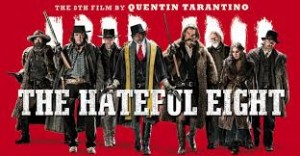 Love him or hate him, Quentin Tarantino has made quite a mark on movies over the eight films he has written and directed. His dialogue driven films have been some of the most quotable in film history as well as some of the most memorable in their own right. As of now he has yet to make a bad movie in my opinion. Now, his eighth film has arrived, and it is time to see if he has hit it out of the park once again, or missed terribly.
With a blizzard looming, a bounty hunter delivering his prisoner to the town of Red Rock is forced to take shelter in a lonely cabin. Not everything is as it seems as the cabin is filled with mysterious characters. The simple transport turns into a case of “who dun-it” and chaos ensues in true Tarantino fashion.
Dialogue is key in every Tarantino film and The Hateful Eight is no different. Sharply written and darkly humorous, the script keeps you engrossed throughout the entire film even in the smallest of conversations. The characters as smartly written, some clearly written for the actors portraying them. Because of this, the delivery of the great dialogue is just as good, making for some of the best back and forth and monologues of the year.
Ennio Morricone is known for his iconic film scores such as The Good, The Bad, and The Ugly, so it’s no surprise that this movie’s score is one of the strongest aspects. Normally, a Tarantino film would hardly, if at all, have an original score composed of it as was the case with Pulp Fiction, which was entirely made up of surf music, rock and roll, soul, and pop songs. With the Hateful Eight, however, the score composition takes precedence, almost forming its own character. The ominous music sets the tone from the very first shot, evoking a mysterious feel to the film. The score suits the film perfectly, making for perhaps the best original score of the year, and a definite contender for best score at the Oscars this year.
Performances all around are phenomenal. Many of the actors have already world with Tarantino in the past, making it easier for the best performance they can possibly give to come out. Out of the eight hateful characters, the best is perhaps Sam L. Jackson as Major Marquis Warren. He is perhaps the funniest of the bunch as well as having a particularly special monologue towards the middle of the film which will either shock or entertain viewers. Kurt Russel as John “The Hangman” Ruth is another fun character who’s rouge and tough, untrusting attitude is entertaining to watch. The scene stealer, particularly towards the end, is Janet Jason Leigh as Daisy Domergue. Her reasons for being a part of the entire affair are left a mystery for most of the film and the development of her character from start to finish is great to see. Overall, every actor did great in their roles and delivered in every aspect.
Tarantino’s love for film shows even in the way the movie was shot. The movie looks great on the 70mm format and viewing it in theaters for the special roadshow was quite the experience. With the overture and intermission, audiences feel as if they are being transported back to the time when projectors were running film and not digital media.
Overall, The Hateful Eight is a great experience at the theaters. There’s a unique atmosphere provided by the film that no others evoked this year. Tarantino still hasn’t lost his touch and I highly recommend this film, especially if you’re a fan of his past works.