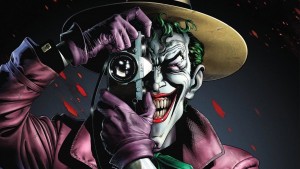 It was only a matter of time before Warner Brothers Animation and DC Comics attempted to adapt the seminal 1988 comic Batman: The Killing Joke. All the pieces to make an excellent Killing Joke film were in place. The all star voice cast of Kevin Conroy as Batman and Mark Hamil as The Joker was assembled, the movie was given an R rating, and the madness could begin. The movie, however, has a crippling flaw.

The Killing Joke revolves around The Joker (Mark Hamil), attempting to show Batman (Kevin Conroy) and Commissioner Gordon (Ray Wise) what one bad day can do to a person. As Batman hunts for the Clown Prince of Crime, The Joker attacks Gordon’s family in a fashion that mirrors his own fall to insanity.

The Killing Joke had a large amount of hype surrounding it, especially after the creative team making it was announced. With executive producer Bruce Timm (Batman: The Animated Series) backing the project and the voice talent returning from The Animated Series to lend their iconic voices to the characters, it seemed like a recipe for success. Yet, there was one major issue. The short length of the graphic novel would not allow the creative team to make a feature length film. Additions were needed in order to make the movie long enough. What they added became the movie’s biggest flaw.

Controversy always surrounded the fact that Batgirl/Barbara Gordon was shot and paralyzed by The Joker in the events of the graphic novel. Barbara is treated like a plot device to progress the story forward and it is done in a disturbing and tasteless way. To attempt to remedy this, the writers of the film decided to expand upon her role in the story in order to make her more of a relevant character.

The first twenty-seven minutes of the movie revolves around Batgirl before she is paralyzed in the latter half of the film. She must deal with a criminal named Paris Franz who has formed an obsession with her. This story is meant to somewhat fix Batgirl’s previous misuse, but it actually does more harm than good. A terrible romantic relationship between Batgirl and Batman is formed, degrading both characters due to how they respond to their romance. Batgirl is made into a clingy girlfriend who makes brash decisions that lead her into trouble, while Batman is made into a jerk because of his attempts to distance himself from Batgirl.

The relationship is only one of many issues with the opening act. The villain, Paris Franz, is not very interesting and is nothing more than a little creep with an obsession. Worse though is the fact that this opening has little to no effect on the rest of the film. It does nothing to explain why Batman wishes to make amends with The Joker at the beginning of The Killing Joke segment, it adds no insight into either Jim or Barbara Gordon before The Joker’s attacks, and it in no way adds anything to improve the rest of the plot. It simply has no relevance to the main story and does little to fix the misuse of the character of Batgirl. It’s a drag to get through and makes viewers desperately ask when they will see the movie they actually came to watch.

When The Killing Joke segment of the movie begins, however, things take a turn for the better. The last forty-five minutes of the film are a near perfect adaptation of the original comic. The voice actors bring their A-game to flesh out their respective characters. Each line of dialogue is delivered perfectly as if the characters had jumped off the comic page and said it themselves. Kevin Conroy and Mark Hamil dominate their respective roles of Batman and Joker, but Tara Strong as Batgirl and Ray Wise as Commissioner Gordon also deserve praise for their work.

The animation is slightly choppy, but looks great despite this. Panels from the comic are ripped from the page and plastered on screen to great effect. The story itself is a dark and disturbing one that delves into the mind of The Joker like none before it. It fleshes out his character more than ever and allows for exploration of what little sanity the clown has left. The story of The Killing Joke truly deserves its place in comic history, and the adaptation reminds us of why.

In the end, if the opening act of this film was not there, this would probably be a perfect adaptation of the classic graphic novel. The fact of the matter is however, that the opening is there, and it weighs down the movie heavily. Ignoring the first half, this is a faithful and well done adaptation of the original story with a top tier voice cast, and effective recreations of the comic panels. It’s not a perfect movie, but the second half saves it from being a complete disaster.

BatmanReviewThe Killing Joke
By Matthew RemboldAugust 30, 2016Editorials, ReviewsLeave a Comment on One Bad Day: A Review of Batman: The Killing Joke