Re-Inauguration of the Patriot Plaza

To all Americans, last Friday was a solemn day where we remembered our country’s bravest, those who took up arms to defend our nation and liberty. Veterans Day is often a day that evokes powerful emotions, we’re grateful to our servicemen and women and we mourn those who have fallen. This was certainly the mood at Columbus on Thursday afternoon as the school re-dedicated the Patriot Plaza. 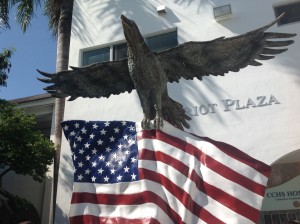 In an event organized by alumnus and Vietnam veteran Michael Carricarte, the redesigned plaza was inaugurated in front of many renown alumni and decorated servicemen. In an impressive display, the U.S Marines presented their color guard. Soon after alumnus and Miami mayor Carlos Gimenez gave a touching speech on how Columbus helped him in his formative years. Mayor Gimenez was followed by Senior and President of the Patriot Club, Austin Wagner, who spoke on the admiration that the student body has towards our soldiers. Finally, Michael Carricarte gave an emotional speech. He passionately remembered his experiences in Vietnam, including Louis Carricarte who died in the line of duty, with alumnus and veteran of the 82nd Airborne George Mills. After the heartfelt speeches, the audience members were treated to lunch as more war stories were recalled. 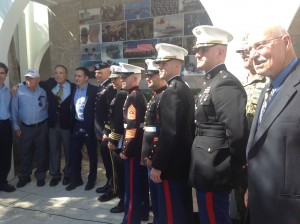 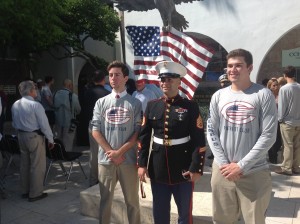 The solemn ceremony impacted all of us. Veterans present ranging from marines to Brigadier Generals who fought in wars from Vietnam to Afghanistan remembered their hardships in the midst of friendships. At the same time, the audience members gained insight to the fact that the sacrifices our soldiers make ought not be forgotten. All in all, last Veterans Day was a special occasion at Columbus.