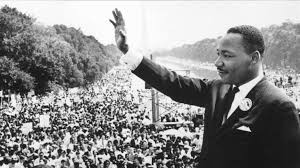 Monday, we celebrate the birth of a man who forever changed the history of African Americans in the United States. The Reverend Dr. Martin Luther King Jr. led a non-violent movement during the 1960s to make African Americans be treated the same as other Americans.

Dr. King received inspiration from his Christian faith and the teachings of Mahatma Gandhi, another non-violent champion for equal rights in India. Gandhi and Dr. King both not only believed that “you must be the change you wish to see in the world,” they became the change. Dr. King believed in civil disobedience rather than violence and anger. He gave African Americans a voice that had long been neglected in American society. He would later say, “Darkness cannot drive out darkness; only light can do that. Hate cannot drive out hate; only love can do that.” Those words were greatly needed when all that seemed to be in the hearts of many was darkness and hate.

In 1963, Dr. King was a major leader in the March for Jobs and Freedom, also known as the March on Washington. The march was attended by a quarter-million people in Washington D.C. It was at this march that Dr. King delivered his famous “I Have a Dream” speech at the Lincoln Memorial. Dr. King would later be named Time magazine’s Man of the Year. In 1964, Dr. King became the youngest person to win the Nobel Peace Prize at the age of 35. Also in 1964, the U.S. Congress passed the Civil Rights Act, which eliminated legalized racial segregation in the America. The legislation made it illegal to discriminate against African Americans or other minorities in hiring, public accommodations, education or transportation. In 1965, the U.S. Congress went on to pass the Voting Rights Act, which eliminated the remaining barriers to the right to vote for African Americans.

Dr. King would later be assassinated at the Lorraine Hotel in Memphis, Tennessee on April 4, 1968. He was 39 years old. Shortly after hearing about his death, another great man, who would himself be assassinated in June 1968, former U.S. Attorney General, Senator for the State of New York, and brother of the late President John F. Kennedy, Robert F. Kennedy, said, “What we need in the United States is not division; what we need in the United States is not hatred; what we need in the United States is not violence or lawlessness, but love and wisdom, and compassion toward one another, and a feeling of justice towards those who still suffer within our country, whether they be white or whether they be black.” At the end of his speech he said, “Let’s dedicate ourselves to what the Greeks wrote so many years ago: to tame the savageness of man and make gentle the life of this world.”

Let us follow the examples of Dr. King, Mahatma Gandhi, and Robert F. Kennedy and work to “make gentle the life of this world.”