A Review of Avengers: Endgame: The Final Battle of an Era 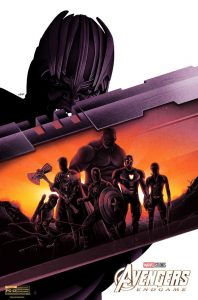 Even before Thanos’ victory in Infinity War, the fourth Avengers movie was already one of the most anticipated blockbuster films of all time. Even with all the pressure of wrapping up an era of such a giant and beloved movie franchise, I honestly had complete faith that the film would not disappoint, no matter how little was shown in trailers. However, despite the Marvel Cinematic Universe’s vast array of incredible and unique characters, Avengers: Endgame focuses primarily on the final assembly of the original six Avengers. By focusing first and foremost on the founding Avengers—Iron Man, Captain America, Thor, Hulk, Black Widow, and Hawkeye—the fourth Avengers movie is able to follow a smaller cast for most of the film, despite it being the largest and most epic battles ever fought by our heroes.

Avengers: Endgame brings the final hope in a now hopeless world, as the surviving heroes hatch a desperate final plan to save everything that was lost in Avengers: Infinity War. The movie’s strength is in showing how far the heroes have come since the start of the MCU, and how far they’re willing to go to save everything they lost. Endgame is a movie about sacrifice, and every one of the original Avengers, with the help of War Machine, Ant-Man, and others, are willing to lay down their lives in order to save the future of the universe. Of course, on the other side of the spectrum we have Thanos, who is so twisted and deluded that he was willing to sacrifice anything to achieve his goal in Avengers: Infinity War. In Endgame, Thanos is just as dangerous, due to being a villain with a completely selfless goal.

Without revealing any plot details, Thanos is still an essential component to Avengers: Endgame, even if he’s lost the almost protagonist-like importance he was given in Infinity War. This made sense in the long run however, as this is the final battle of many of “Earth’s Mightiest Heroes,” which necessitates iconic characters such as Iron Man and Captain America getting as much screen time as possible.

Due to the secrecy behind most plot aspects of Avengers: Endgame, its best to keep a spoiler-free review short and to the point, in order to release one that’s more in depth in the coming weeks. All secrecy aside, Avengers: Endgame is an extremely satisfying continuation of Infinity War, and provides closure for many relationships and characters, despite not being the official ending of the Marvel Cinematic Universe. The movie certainly has a feeling to it of things never being the same in the MCU, but it allows us to be extremely grateful for joining many great characters on a 22 film journey.