A Review of Captain Marvel: A New Hero Steps Up to Bat 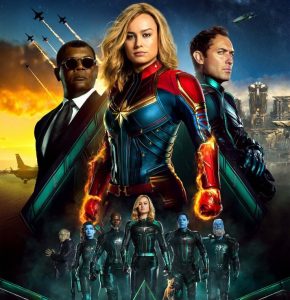 2019’s first MCU movie, Captain Marvel, has already blasted its way into theaters. Being the 22nd in its cinematic universe, this film introduces Captain Marvel—aka Carol Danvers—who was teased in the post credit scene of Avengers: Infinity War. Danvers is an amnesiac warrior of the Kree Empire, and the film dives into the mystery of uncovering her past, while also focusing on a complex conflict between the Kree and Skrull alien races. Although there are many cool moments and nods to the larger MCU, the movie has its share of issues, which I feel hold it back from being a unique or innovative superhero story.

Captain Marvel is supposed to serve as an origin for the character first and foremost, but it often seems that the movie doesn’t focus enough on the title character. While viewers do learn more of her background throughout the course of the story, I left the theater with the feeling that I still didn’t know the MCU’s Carol Danvers too well. In addition, while it was an interesting approach to investigate Carol’s past in the form of a mystery, it only hindered the ability for viewers to relate to the character. While some of the MCU’s other origin movies such as Iron Man and Doctor Strange had a stronger focus on the title characters and their motivations, Captain Marvel may have focused too heavily on so many other protagonists that the movie seemed to sacrifice some of Carol’s story in order to accommodate for a larger cast. However, there were pros to this decision, including giving us some really interesting supporting characters, even if it may have hurt the movie’s protagonist and how well we grew to know her.

One of the most intriguing aspects of Captain Marvel is the intergalactic conflict between two alien peoples, the Kree and the Skrulls. While we’ve seen hints of the Kree in Guardians of the Galaxy when we were introduced to Ronan The Accuser, fans of Marvel Comics have been anticipating the arrival of the shape-shifting Skrulls ever since the Marvel Cinematic Universe began to set its adventures outside of Earth’s boundaries. Having always preferred Skrulls over the Kree, seeing them on the big screen was what I was most anticipating in Captain Marvel, and though I was surprised by how they were portrayed, I was nowhere near disappointed. The Skrulls were, in my opinion, the scene stealers of Captain Marvel, and this especially goes for Ben Mendelsohn’s Talos. Ever since Mendelsohn’s portrayal of Director Krennic in Rogue One: A Star Wars Story, I believe that he’s stolen the show in every movie I’ve seen him in. Talos displays a life and sympathy in his alien race that I was not expecting from the “villainous” Skrulls. Although it doesn’t seem that there’s much of a chance that we’ll be seeing Skrulls again in the MCU’s near future, I would probably bet that most viewers would be excited to see these green aliens later on.

Altogether, Captain Marvel may not be one of Marvel’s best films, but it is worth the price of admission for regular audience members of the MCU. Seeing as how there are so many elements that make up the film, there’s most likely something enjoyable for every viewer. There are also tons of references to other Marvel movies, but because there are so many, not all of them landed well with me, and some even take away from other moments in the Marvel Cinematic Universe. As much as I’m conflicted as to how much I enjoyed Captain Marvel, that doesn’t take away from the fact that as a whole, I did enjoy it. As one final thought, I couldn’t end this review without reflecting on the tributes to Stan Lee, as the entire audience roared in applause and approval whenever he was mentioned. His mark on pop culture and the world as a whole continue to make an inspiring impact.

One Response to “A Review of Captain Marvel: A New Hero Steps Up to Bat”