A Review of Star Wars: The Last Jedi

This review will be spoiler free. I’ll be doing another article in January that goes into more detail with the plot and characters. 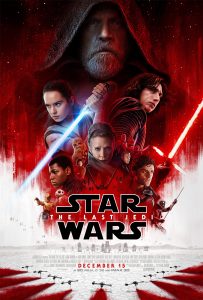 After a two year wait, the highly anticipated sequel to Star Wars: The Force Awakens is now in theaters. So far, the film has gotten some great reviews, although there are also many who did not enjoy it. There are some things in the movie that I feel didn’t fit into the Star Wars galaxy, but overall, I did think the film was a worthy addition to the new Star Wars trilogy.

The strength of the film comes mainly from the Force-using characters, specifically Rey, Luke Skywalker, Kylo Ren, and Supreme Leader Snoke. The conflict of Rey and Kylo Ren continues, and they are both struggling with the dark and the light inside of them. Many of the characters who were introduced in The Force Awakens have evolved and become stronger than when we last saw them.

On the other side of the story, Finn, Poe, and others are attempting to save the last of the Resistance from the First Order. Of the new characters introduced in The Force Awakens, my favorite was Finn. I really liked the idea of a stormtrooper who switches sides, and John Boyega’s performance only made the character more interesting. While Finn’s scenes weren’t as captivating as those between Rey and Kylo Ren, I still thought John Boyega did a great job, making Finn an enjoyable and relatable character as he is often caught in the middle of the conflict.

Many of the things I found strange in the movie could be seen during the side plots. Some lines just didn’t really fit in. This was mostly relevant in some of the jokes in the movie. Some of the jokes were out of place, and put a confused look on my face. A few of the more serious scenes were also a bit out of place. If you have seen the movie, that scene with Leia (you know the one) was really strange to me. I don’t even really know how to respond to it. It’s not that I don’t like it, but when many people saw it they were probably thinking, “What just happened?”

Besides a few scenes which stood out “like a sore thumb” compared to the rest of the movie, The Last Jedi is pretty consistent in tone. It’s darker because of how stretched thin the Resistance is, but manages to maintain the fun mentality that the Original Trilogy and the recent Star Wars films have kept. Overall, it may be the Star Wars movie with the most flaws since the franchise’s comeback with The Force Awakens, but that doesn’t necessarily make the film bad. As big of a Star Wars fan as I am, I’m not blind to the flaws of the movie, although sometimes I honestly wish I were….